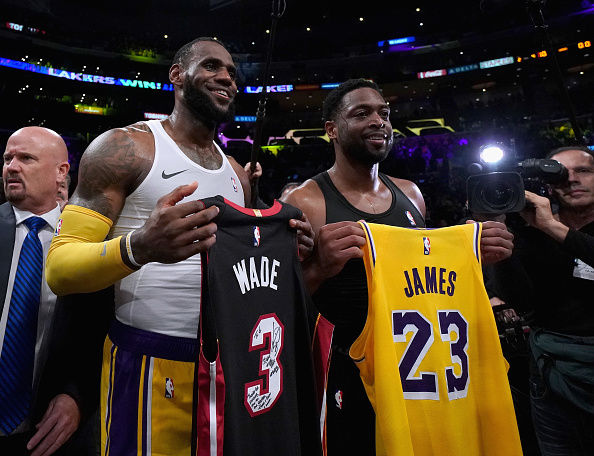 Immediately after last night’s game between the Heat and the Lakers, longtime friends Dwyane Wade and LeBron James held a memorable exchange on the court in Wade’s farewell game in L.A.

During the exchange, LeBron told Wade that “it was either here or the Garden,” in reference to the venue for their final showdown which led to many Knicks fans to believe that LeBron had actually considered playing in New York before choosing to sign with the Lakers this offseason.

HOLD UP a second…

After Wade says “I appreciate you letting it end here,”

LeBron says “it was either here or at the Garden.”

YOU GOTTA BE KIDDING ME @nyknicks!!!!!! pic.twitter.com/yJFzthxgJO

Knicks fans went on to have a full meltdown on Twitter after the exchange.

Me finding out LeBron was considering going to the Knicks last summer @FredoDGawd pic.twitter.com/1D5D23OS3b

LeBron told Dwyane Wade on camera that the places he considered ending his career were "here or the Garden" AND AS A KNICKS FAN I AM NOW GOING TO DIG THE DEEPEST HOLE I CAN, NEVER TO COME OUT

Finding out LeBron nearly went to the Knicks is like when you're 30 and married and you run into the girl you had a huge high school or college crush on and she says to you "How come you never asked me out?"

Me finding out LeBron considered going to the Knicks @WorldWideWob pic.twitter.com/hlcjeFSeDD

While speaking to the media, LeBron clarified what he meant with his offhand comment and revealed that he was only talking about the venue and that he never really considered joining the Knicks.

LeBron James said in reference to his "here or the Garden" comment that no other venue could have held this final duel between LeBron and Wade other than those two venues. (Not that he was thinking of signing with the #Knicks)