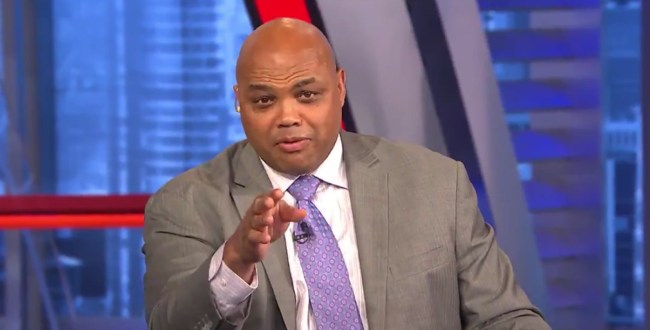 With the NBA Playoffs underway, and LeBron James not participating in them for the first time since 2005, NBA on TNT analyst Charles Barkley basically begged the future Hall of Famer to join him and the rest of the crew in studio for the postseason.

“LeBron James, come into the studio. You ain’t got nothing to do. The playoffs started yesterday. You’ve got free time. I know you’ve got to pick a coach and a general manager. Just put that on the back burner. I’m speaking on behalf — I’m begging you on behalf of (the rest of the crew) Ernie (Johnson), Kenny (Smith) and Shaq,” Barkley pleaded before throwing in some additional perks including getting James the Game of Thrones throne.

Of course, no one really expected LeBron to respond to Barkley’s request. Especially considering the fact that the two got into a pretty heated beef in 2017 where Barkley questioned James’ leadership and LeBron telling ESPN, “I’m not going to let him disrespect my legacy like that. I’m not the one who threw somebody through a window. I never spit on a kid. I never had unpaid debt in Las Vegas. I never said, ‘I’m not a role model.’ I never showed up to All-Star Weekend on Sunday because I was in Vegas all weekend partying.”

Yeah… well, surprisingly James DID end up responding to Barkley’s begging, and he didn’t say no!

“Sir Charles, I actually do have a ton going on but I may take you up on your offer. We shall see. #KingInStudio👑🎙,” he wrote on Twitter.

Sir Charles, I actually do have a ton going on but I may take you up on your offer. We shall see. #KingInStudio👑🎙

Of note, this isn’t the first time this season Barkley has asked James to come join him in the NBA on TNT studio. He also made the request back in early March.

Charles Barkley invites LeBron to Inside The NBA during the playoffs because he;s going to "have nothing better to do" 😂😂😂 pic.twitter.com/kGvhG2rV3F

Needless to say, many NBA fans on Twitter are all in on James joining Barkley, Shaq, Kenny and Ernie.