LeBron James Responds To Not Being Named MVP Finalist 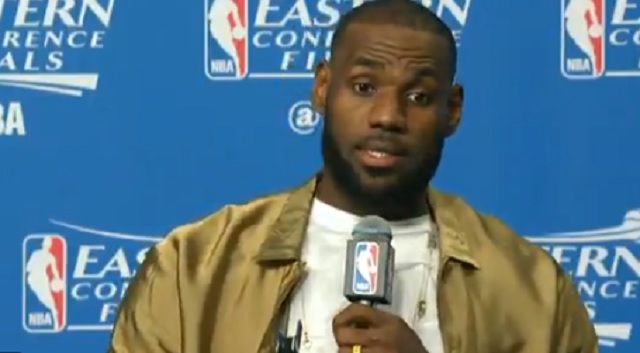 Last night the NBA annouced that the Houston Rockets James Harden, Oklahoma City Thunder’s Russell Westbrook and Kawhi Leonard of the San Antonio Spurs were the three MVP finalists for this season.

The finalists for the 2016-17 KIA Most Valuable Player are… #NBAAwards pic.twitter.com/x6XN6CdreY

Considering how dominant LeBron has been in the playoffs several Twitter users were miffed by his exclusion.

@NBAonTNT Okay they can't have LeBron in there…..really?? I'm a Spurs fan and we all know LeBron is the best in the world

@NBAonTNT Wtf where is lebron he's better than all these players combined but it's fine lebron is still the best player in the world pic.twitter.com/sHFHZYQPn6

After last night’s destruction of the Celtics, LeBron took the diplomatic approach when responding to being snubbed for MVP.

“What are you going to do about it at the end of the day?”. “My only job is to be the MVP for this team every night, put my teammates, put our franchise in position to be successful and ultimately compete for a championship. For me, I know what I bring to the table. This league knows what I bring to the table. That’s for you guys to write about. It’s not for me to be concerned about.”

LeBron on not being a finalist for MVP pic.twitter.com/2MIfVyPYgn