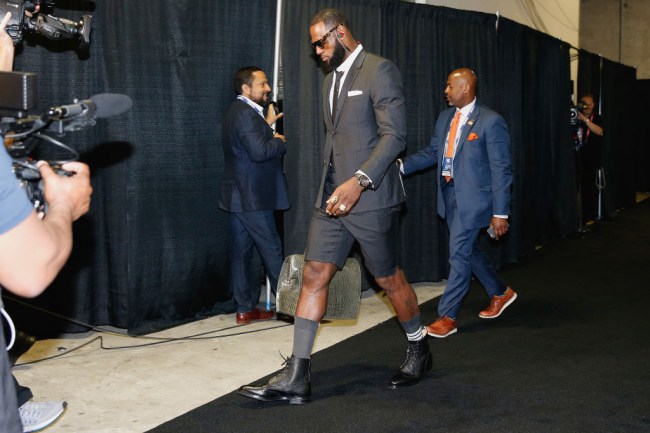 While JR Smith’s boneheaded play was easily the biggest story of game 1 of the NBA Finals between the Warriors and Cavs, LeBron James’ ridiculous suit shorts/ man purse outfit was a close second.

For the past two days, everyone has had fun with LeBron’s now infamous Thom Browne suit.

LeBron with the suit shorts! pic.twitter.com/TRVI5lcx4z

shorts with a suit? might be an L tonight, you guys pic.twitter.com/VV0j0jNp7b

While everyone was laughing at LeBron’s dumb outfit, the Undeafeated’s Aaron Dodson broke down James’ entire ensemble.

Down to his socks and shades, here’s a breakdown of the complete outfit James rocked into Game 1 — and the price that each piece of the look cost the King.

So yeah, Bron probably spent $46k to look completely ridiculous and get memed to death on the Internet. Thom Browne must be loving the publicity because you can’t get on Twitter without being bombarded by jokes of LeBron’s outfit.

I love LeBron as much as anyone… But man, you can’t stomp off in suit shorts. pic.twitter.com/e8VWrWigbZ

i can’t stop watching LeBron walk out with his sunglasses and his handbag like a mom who has had ENOUGH https://t.co/QFpHXTH4d3

Me leaving a meeting that could've been an email pic.twitter.com/6feJWp73A2