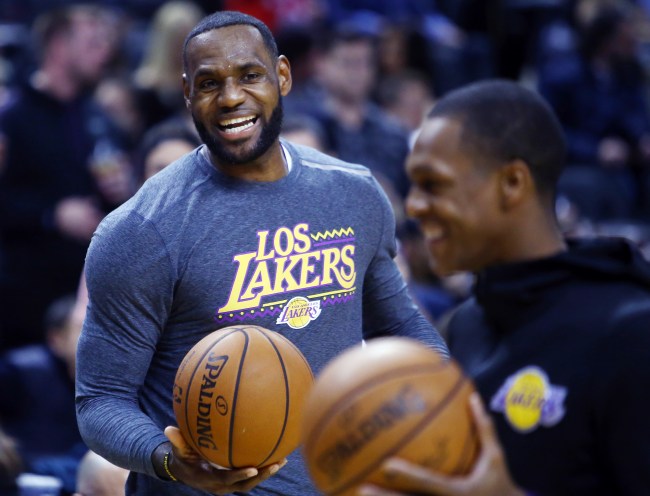 It was only a matter of time until LeBron James attempted to monetize “Taco Tuesday”.

For weeks, LeBron has been yelling the phrase “Taco Tuesday” on social media and it seems like he’s trying to own the phrase for social media posts and an upcoming podcast.

JUST IN: LeBron James leaves no potential business opportunity on the table. Over time, he has sought to own “Taco Tuesday.” He has now filed to trademark the phrase for social media posts and a show of that name. First discovered by @JoshGerben pic.twitter.com/IXNduvilzR

A company owned by Lebron James, LBJ Trademarks LLC, has filed a trademark for TACO TUESDAY.

The filing indicates Lebron intends to continue offering his popular 'TACO TUESDAY' posts on social media and launch a podcast under the name.

If the application is approved by the USPTO, James could prevent others from offering online shows and podcasts under the name 'TACO TUESDAY.' The application that was filed still has to undergo a government review which will take about 4 months (in most cases).

Apparently, a taco shop already owns the trademark for “Taco Tuesday” to be used in restaurants.

Yes. Taco John's has owned a federal trademark registration on TACO TUESDAY for "restaurant services" since 1989.

The USPTO could refuse Lebron's application because of this pre-existing registration. pic.twitter.com/RtRdiD4oZy

Of course, the Internet was annoyed with LeBron attempting to trademark a phrase that has been widely used before he started using it on social media.

Taco Tuesday belongs to all humanity. This aggression will not stand. https://t.co/uglyUbVDvU

This stupid Taco Tuesday nonsense is really high up on the corny things LeBron has done. It’s just so trash. https://t.co/61qoj3SpR2

Crazy how Lebron invented getting your haircut in a Barber shop, and Taco Tuesday, let alone in the same year https://t.co/UnCl1rz87t

Lebron is my guy and the goat, but this aint it. I know restaurants that have been doing Taco Tuesday for years. He did probably bring a new wave, but the phrase isn’t his. https://t.co/2CY2TdQ6qN

I KNOW lebron doesn’t think he made taco Tuesday a thing when every Mexican restaurant has cheap tacos specials on tuesdays. He doesn’t even eat real tacos. FOH