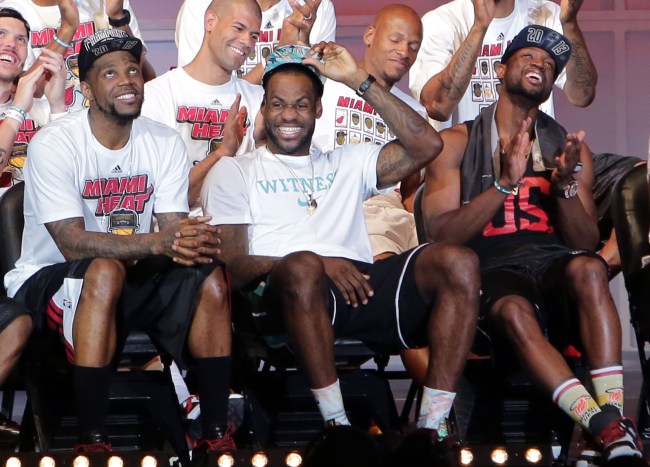 During a Miami Heat youth camp yesterday, Udonis Haslem revealed that LeBron James had visited Miami before the NBA finals which is of course going to set off alarm bells for Heat fans who are hoping LeBron returns to Miami this offseason.

Asked about the possibility of James returning for another tour with the Heat, with James eligible to leave the Cleveland Cavaliers as a free agent, Haslem divulged that James visited Miami before the Cavaliers eventually were swept by the Golden State Warriors in the NBA Finals.

Relocation, however, was not on the table, with the visit actually coming between the Eastern Conference semifinals and finals.

“That,” Haslem said, “wasn’t part of the conversation.”

But that doesn’t mean it might not be again.

“Obviously, he was getting ready for the NBA Finals,” Haslem said. “But there are great pieces here and we all know the city loves him and we all know what he’s capable of doing.

“Am I going to be a part of the recruiting process? Hell yeah,” he said. “If he reaches out and we talk, I’m going to throw it out there. But you just never know.”

LeBron’s visit isn’t that strange considering he has a lot of ties to Miami and he probably just wanted to wind down and the hit the beach before the finals.