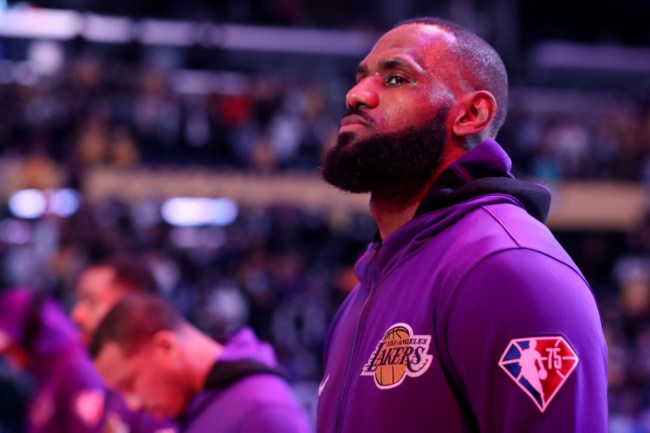 The controversial moment came after Kevin Porter Jr. hit a shot for Houston in which Consor referenced his dad.

“Kevin Porter Jr., like his dad, pulled that trigger right at the right time,” said Consor.

That’s quite a thing to say seeing as how Porter’s father, Bryan Kevin Porter Sr., pleaded guilty to first-degree murder in a shooting of a teenage girl back in 1994.

LeBron, like many others on social media, called for Consor to be fired for his comments.

There’s more to the story here, however.

Oh he thought this was cool huh!!?? Nah we ain’t going for this! Sorry but this ain’t going to fly! How insensitive can you be to say something like this. Beat it man! I pray for you but there’s no place in our beautiful game for you! https://t.co/UgVOBUOsPK

Others on social media pointed out that Consor may have mistakenly believed that former NBA player Kevin Porter is Kevin Porter Jr.’s dad. Some wondered if Consor simply used an unfortunate choice of words to describe Porter Jr.’s game-winner.

That appears to be the case as Consor issued an apology on Thursday morning and explained that he thought Porter Jr. was the son of former Washington player Kevin Porter. Consor stated that he has reached out to Porter Jr. and hopes to touch base with him about the incident.

Consor has spent 22 years broadcasting Wizards, and formerly Bullets, games in Washington. Him assuming Kevin Porter Jr. was the son of Kevin Porter, a former player for the Bullets, is a pretty easy mistake to make. He shouldn’t make that mistake as a veteran broadcaster, but things happen.

If we take Consor’s word for it – and assume he wasn’t making a joke about a man murdering a young girl because he’s a sane human – all we have here is LeBron James yet again overreacting on Twitter about something he knows absolutely nothing about.

LeBron was 8-years-old when Porter Jr.’s father was charged with first-degree murder back in 1994. Porter Jr. of course wasn’t even close to being born yet.

There is likely a 0% chance James knew Porter Jr.’s dad was a murderer until he saw half of Twitter talking about it on Wednesday night.

James simply thought the worst, went with the trend on social media and called for someone to lose their job over an unfortunate choice of words. LeBron’s initial tweet calling for Consor’s firing came before the apology, but later on Thursday, he doubled down on his opinion that Consor should be fired.

James claims he wanted to wait until Thursday morning to sound off against the announcer instead of tweeting about it after hearing the call live.

LeBron on the KPJ announcer controversy: "I stand by my tweet and I stand by everything I said."

He notes like players get scouting reports, media members gets notes. "I believe they do their due diligence as well."

LeBron heard the call live, waited until this AM to comment.

James also went on to say that he wasn’t calling for Consor’s job, even though in his first tweet that was sent about eight hours earlier, that’s exactly what he did.

LeBron says he's not calling for Glenn Consor to lose his job, but he isn't OK with letting that mistake go: I never met the guy. I don't know him. I pray for him, like I said in my tweet. But I can't let that comment ride about a guy (Kevin Porter Jr.) who looks up to me.

If you’re waiting for LeBron to admit he was wrong or apologize to Consor, there’s a better chance of water not being wet tomorrow.