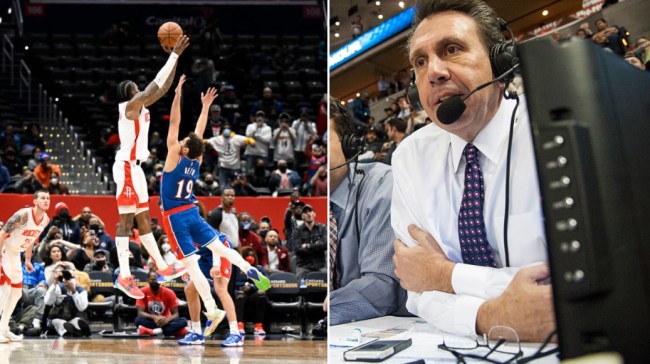 Wizards announcer Glenn Consor has found himself under fire over his commentary during Wednesday night’s Rockets-Wizards game.

At the end of the game, Rockets guard Kevin Porter Jr. hit a buzzer-beater three-pointer to seal the Rockets win. On the Wizards broadcast, Consor noted that “like his dad,” Porter Jr. “pulled that trigger at the right time.”

“Kevin Porter Jr., like his dad, pulled that trigger right at the right time”

I can’t believe this was actually said on the Wizards broadcast.. Completely inexcusable. pic.twitter.com/bZcWEVqPOP

Fans believed that Consor was referencing the fact that Porter Jr.’s father was arrested for manslaughter in the shooting of a 14-year-old girl,

There’s no fucking way he said that on the broadcast 😦😦😦 https://t.co/VVVzoJXtrx pic.twitter.com/k6RbJ3Pdzb

I feel like it’s possible this is who the announcer thinks KPJ’s dad is. Otherwise he’s a brazen maniac pic.twitter.com/D2lQ6XXwPn