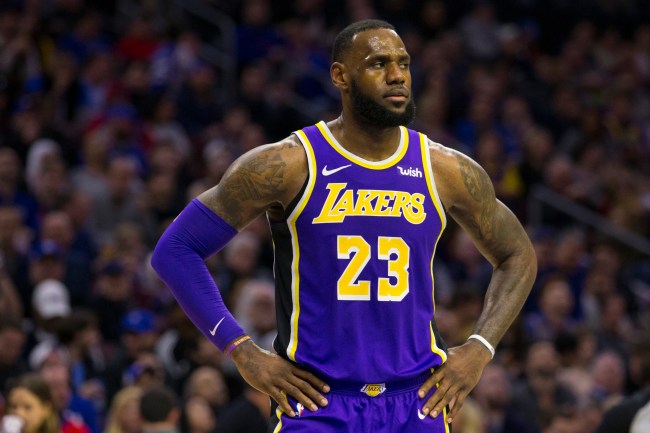 Over the weekend LeBron James and his agent/friend Rich Paul raised eyebrows when they made it out to Cameron Indoor stadium to watch Duke play Virginia.

Starting the tampering before they even get to the NBA. pic.twitter.com/4mk6l3B9Rx

Fine line between LeBron showing up at a Duke game and potentially recruiting for agency he is associated with Klutch. But Players Association, which regulates agents, would never say anything because James is #2 ranking player executive in union. pic.twitter.com/dZr6M16Dyl

Today, LeBron spoke to ESPN about going to the Duke game and said he went because he’s boys with coach K.

It was a game between the [top] teams in the country,” James told ESPN of his decision to jet down from Philadelphia the day before the Lakers played the 76ers. “Coach K [Mike Krzyzewski] is my guy. And the flight was 35 minutes. So, it was easy. It was easy to be able to do it. It was my first time seeing Duke play, I think, in my life. I want to go to Cameron [Indoor Stadium] someday, too, though.”

James seemed pretty pissed about all Internet chatter that he was trying to recruit Williamson to Paul’s agency.

James and agent Paul took exception to anyone who thought the visit was a recruiting trip.

“A recruiting trip? I didn’t talk to anybody,” James told ESPN.

“And he’s African-American, too. Throw that in there.”

Paul was unhappy with the narrative that he and LeBron were out there to recruit Zion.

All I care about is respect,” Paul told ESPN. “That’s all. We were just enjoying a basketball game. Didn’t talk to nobody. Didn’t do anything or nothing. But it’s an issue when you see several media people shining a light on it as if it’s a negative thing. But when I was one of his homeboys, one of his ‘posse’ and we went to see Steph Curry in Detroit (for a Davidson-Wisconsin NCAA tournament game in 2008), nobody said anything. Nobody said nothing.”

“Think about it from this perspective,” he said. “On one end, you got a ‘posse.’ Or they’re ‘leeches.’ Years ago it was leeches or ‘hanger-ons.’ They’re OK when they can call you that, but they’re not OK when it’s a CEO and you have the biggest superstar in the world supporting somebody that he trusts to do his business off the court and just who happens to be a friend.”

I’m not entirely sure why LeBron and Paul are mad considering Klutch Sports frequently uses LeBron’s clout to recruit players.