Lee Corso Lives His Best Life During College Gameday Weekends With Junk Food, Cigars And At Least 11 Hours Of Sleep 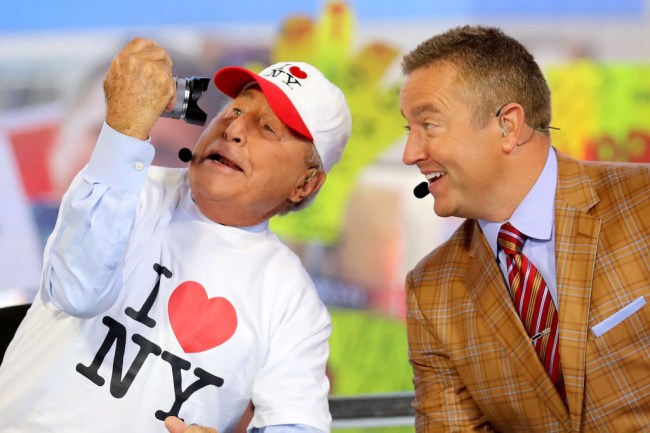 We all know about Lee Corso’s antics on College Gameday. Throwing on a mascot head, making picks and yelling ‘not so fast my friend’ have made the man a legend. Well, it turns out he lives like a legend off-camera as well, at least during Gameday weekends.

Kirk Herbstreit has always been the guy that pokes fun at Corso during Gameday and earlier this week he gave us an inside look at Corso’s routine leading up to Gameday and let’s just say Corso isn’t living like any other 84-year-old.

My man!!
Coach getting his satchel all ready for his weekly post meeting routine. Snacks…drinks…notes for the show…cigar…He’s ALLL set for another Friday pm! pic.twitter.com/JiXUNzeSOm

So, every single Friday before College Gameday Corso tries to consume as much sugar as possible pretty much.

First of all, it’s wild he carries all of this food in a satchel from 1996, but hey he’s 84-years-old and old men are set in their ways. He brings out not one cookie, but a bowl of cookies, then shows off a crazy looking donut and then throws in the little tidbit that he sleeps 11 hours (!) a night.

Can’t forget he goes through six cokes on the weekend as well, smokes a cigar if it isn’t raining and his filler between all of this is potato chips.

Are we positive Corso isn’t a college student, because I know plenty of people (me) that lived that life during undergrad more often than not. I’m also just going to guess his wife Betsy isn’t on-site for the weekend and Corso just consumes every bit of junk he sees.

Never change, Mr. Corso, you’re looking good for an 84-year-old dude that eats like the rest of us wish we could.