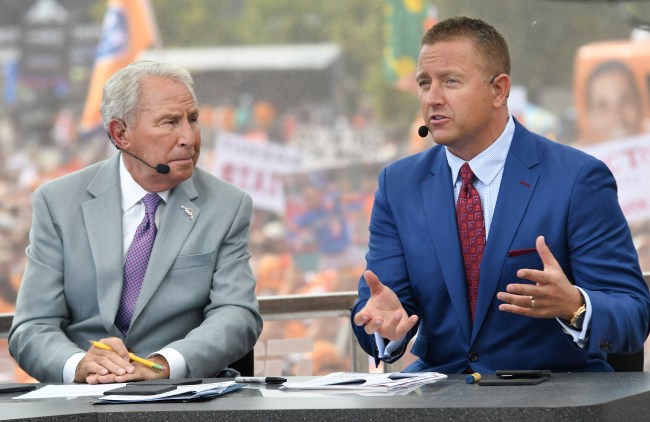 It has become a Saturday tradition like no other. Every Saturday morning we can count on Kirk Herbstreit to post a video on Twitter where he asks Lee Corso for his opinions on the day’s slate of college football games. Corso has made a habit of delivering some interesting quotes in these videos.

This week, he predicted some wild outcomes for 2 of the biggest games of Championship Saturday.

It’s a huge day in CFB and LC breaks down the champ games for us including his upset special of the day 👀👀👀 pic.twitter.com/66PCdXgdEU

First, Corso predicted an Alabama upset over Georgia in the SEC title game. Corso believes the Tide are dangerous with their back against the wall. He also believes Bryce Young is on his way to winning the Heisman and will win the MVP trophy in this game.

His next prediction wasn’t quite so surprising. He thinks Michigan runs through an Iowa squad that he simply doesn’t think is actually all that good.

Then Corso returned to his crusade against Cincinnati. Corso has gone on the record saying that Cincy doesn’t belong in the College Football Playoff and Group of 5 schools shouldn’t be eligible to begin with. That makes it no surprise that he’s picking Houston to hand the Bearcats their first loss.

Corso pointed to Houston’s 6-0 record on the road as evidence that they’re going to pull off the upset in Cincinnati. I guess that road record negates that Cincinnati hasn’t lost anywhere this season.

I’m sure Corso’s predictions were influenced by his desire to not see Cincy in the playoff, but if he’s right then we’re in for plenty of excitement on Championship Saturday and possibly even more on Selection Sunday.