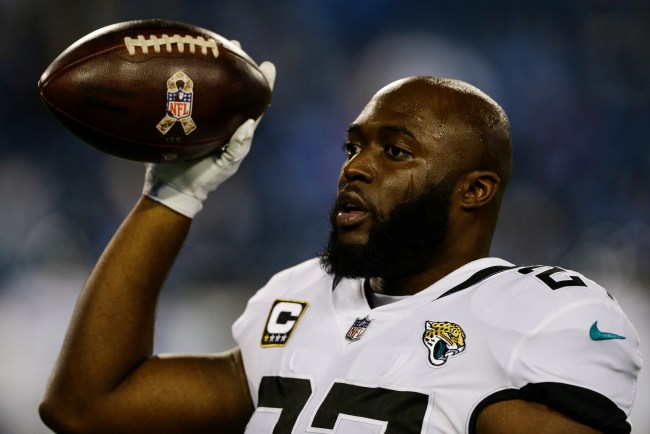 The 2018 NFL season hasn’t been great for Leonard Fournette and the Jacksonville Jaguars. After winning some games early on this year — which included an impressive victory over the New England Patriots — things sort of spiraled out of control, leaving them in the land of pathetic with a current 4-9 record. All this comes after a surprising trip to last year’s AFC Championship Game, which had many thinking the Jags could reach the Super Bowl this season.

Welp, that didn’t seem to work out, did it?

As awful as the season has been for the Jaguars, it’s been even worse for third-year running back Leonard Fournette. Not only has he fought inconsistency all year, but he was involved in a vicious fight with Shaq Lawson of the Buffalo Bills a couple weeks ago, which resulted in a one-game suspension from the league. Overall, the frustration seems to be at an all-time high with the guy.

And, unfortunately, that aggression was put on display again following Jacksonville’s loss to the Tennessee Titans on Thursday Night Football last week.

In a video obtained by TMZ Sports, Leonard Fournette was seen clapping back at a heckling fan who was trying to get under the delicate skin of the player. Instead of brushing off the guy, Fournette decided to threaten him, even saying he’d “whup your ass” after inviting him to come down to meet him face-to-face. Here’s the video released from TMZ.

According to Bleacher Report, it wasn’t the first time that game that Leonard Fournette had tried getting into it with Titans fans, as B/R reported that, earlier in the Thursday Night Game, the running back had to be pulled back by a couple of Jags staffers for trying to start a fight with fans. What the hell is wrong with this guy?

Considering Leonard Fournette rushed for just 36 yards on nine carries in the 30-9 loss — while seeing fellow running back, Derrick Henry, go for a career night on the other sideline — it’s clear he was pissed-off about how things went down. Still, keep your cool, man, because pro athletes can’t just go around talking sh*t to fans anytime they want to.