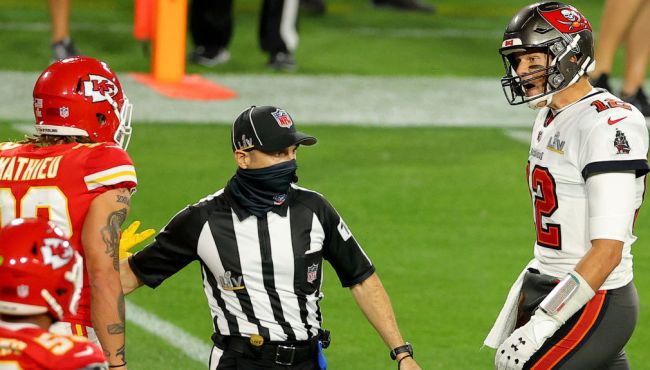 As a New York Jets fan, Tom Brady has spent the large majority of his 22-year-long career beating my favorite team up and down I-95, so I’m as aware as anyone of his legendary competitiveness.

Even still, as someone who’s been rooting against this man for my entire life, inside moments like this one becoming public are fascinating to me, as they reveal that Brady is, in fact, not a machine engineered to play football and market products, but an actual human being with thoughts and feelings and emotions.

During a recent episode of the I Am Athlete podcast, former NFL running back LeSean McCoy, who was on last year’s Super Bowl-winning Tampa Bay Bucs team, revealed what Brady said to Chiefs safety Tyrann Mathieu while the two were jawing at each other during the game. Click the right arrow in the slideshow to see the video of McCoy’s comments.

Brady has since responded to the incident in light of McCoy’s revelation, as he commented on the Instagram post saying “Just football… love my guy Tryann Mathieu.”

Brady and the #2 seed Tampa Bay Bucs will begin their quest to defend their Super Bowl title when they host the #7 seed Philadelphia Eagles at Raymond James Stadium on Sunday, January 16 at 1 p.m..

RELATED: Tom Brady Refused To Leave Panthers Game Until He Made Sure Rob Gronkowski Got $500k Incentive