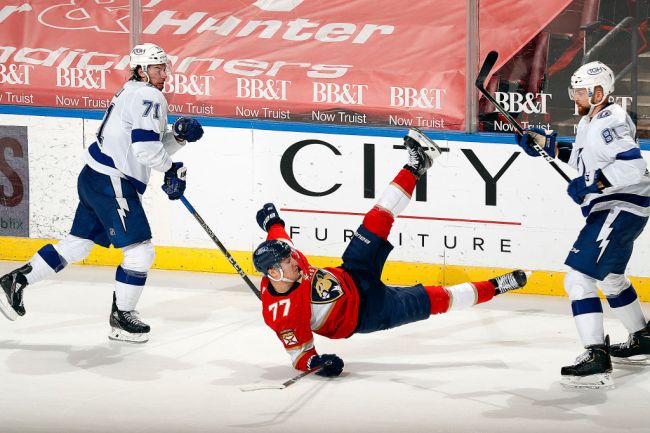 We are in for a treat of a playoff series between the Lightning and the Panthers. The battle of Florida is full of bad blood and Monday’s regular season finale was no exception. Both teams from the Sunshine State already hate each other by nature of location, but the most recent beef started on Saturday with a penalty-filled first leg of a two-game stand outside of Ft. Lauderdale.

Tampa Bay fell 5-1 in the first meeting and could have clinched home ice with a win. The game saw both teams combine for 136 penalty minutes and seven misconducts. Things began with this nasty cross-check from Ondrej Palat.

Acciari had to come off of the ice to have his head and neck checked.

From that point forward, it was on. Acciari was coming for heads.

The Central Division foes went back and forth all night and midway through the third period, Pat Maroon didn’t take kindly to being called a name.

He got his money’s worth as he was leaving the ice.

Maroon ended up being suspended one game for unsportsmanlike conduct and had to miss the rematch on Monday. Fortunately for television and content, he made his feelings for his rivals very clear the night before his suspension-earning hit. There is going to be a lot of big hits, chirps and fights over the next (as many as) seven games, if we’re lucky.

I asked Pat Maroon last night about #TBLightning approach to this weekend's two-game set vs. #FlaPanthers and he was rather blunt about #GoBolts mindset pic.twitter.com/xPLUpjgvKV

The Panthers flipped the script for the last game of the regular season and could clinch home ice advantage with a win or an overtime loss. They got up big and didn’t look back, but not without fireworks. A full line-brawl broke out in the second period and knucks were FLYING everywhere.

ALL HELL BROKE LOOSE IN FLORIDA! THESE GUYS ARE THROWING!! 💥😳pic.twitter.com/psZOzJwfdX

Hold onto your hats, it’s about to be BIG-TIME playoff hockey over the next few weeks as these two duke it out.