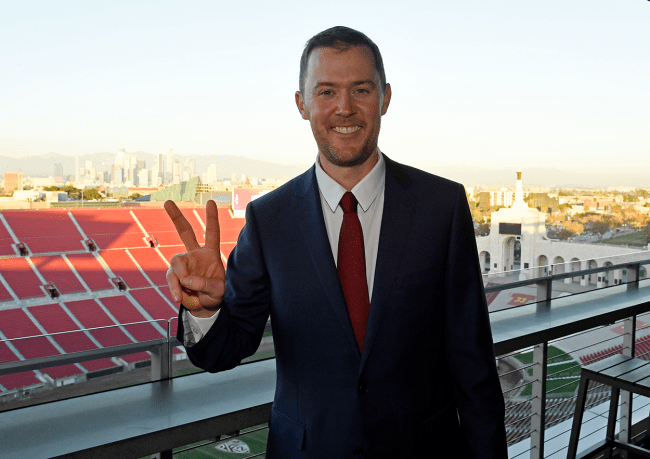 In a matter of 24 hours, Lincoln Riley lost to Oklahoma State, said definitively that he was not taking the LSU job after the game, and then accepted the USC job. As a result, Oklahoma fans are furious.

Signs that called him “traitor” were plastered throughout campus and Sooners fans were quick to rip Riley on social media. The fact that he left seems to be less the issue, so much as the manner in which he left and the fact that he is leaving because of the school’s upcoming move to the SEC.

Among those who are upset, the Amish community has voiced its displeasure.

At some point after the news broke, the Amish Cheese House took shots at Riley through its announcement board. It’s hilarious.

The Chouteau settlement, lying in Mayes and Rogers Counties, is the oldest and largest of Oklahoma’s Amish communities. Founded in 1910, there are about 100 Amish families in a town with a population of 2,114.

The Amish Cheese House is owned by Wes and Leah Miller. They have a background in Mennonite and Amish communities and established the nostalgia-inducing shop in 2000.

Since then, it has grown and expanded into what it is today with more than 45 employees after starting with two. One of the employees has an incredible sense of humor and changed the sign to take shots at Riley’s abandonment.

Riley, who is already off making a small fortune in Los Angeles, surely is not concerned with the opinions of his former fans, nor the Amish. But if the Amish community is upset, imagine what the passionate Oklahoma football fan is feeling.