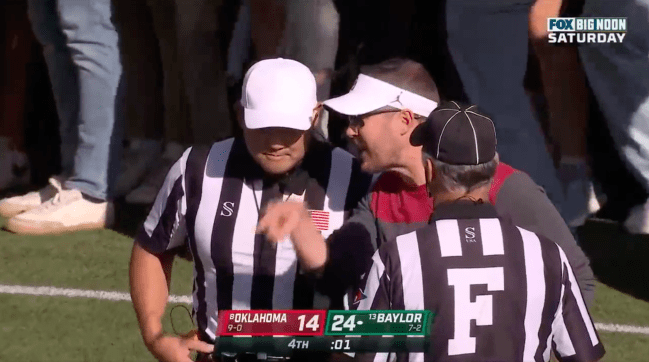 Undefeated Oklahoma is no longer undefeated. The Sooners traveled to Waco, Texas on Saturday and could not get anything going on offense against Baylor.

Starting quarterback Caleb Williams went 10-for-19 with two interceptions, the team totaled only 260 yards offensively, less than 100 rushing, and converted only two of nine first downs. Things were so bad that head coach Lincoln Riley even put Spencer Rattler back in the game during the second half.

He ultimately sealed the former five-star quarterback’s fate in Norman by re-benching him, but neither decision made a difference. The Sooners committed nine penalties and punted four times to the Bears’ one. They were doomed from the start.

With the loss, Oklahoma is likely removed from College Football Playoff contention, barring chaos across the country.

To celebrate the monumental win, and what they believe to be the start of a new era under head coach Dave Aranda, Baylor fans stormed the field. However, they jumped the gun just a little bit.

After taking the clock almost all of the way down, Aranda decided to call a timeout with one second left.

The fans, thinking it was over, poured onto the field. The game was not over,

Upset by the decision to stop the clock and prolong the inevitable, Riley was FURIOUS. He went on an angry, NSFW tirade toward the officials, expressing how it was “total bulls—t.”

The fans were quickly informed that there was one second remaining and packed together on the sideline. Riley remained angry and continued to scream and yell. He even sent his team to the locker room.

Baylor fans rush the field with 1 second left on the clock pic.twitter.com/acAMaG2Y1Y

After reluctantly bringing his defense back out from the tunnel, Riley had his team lineup for what he assumed to be one final kneel down. It was not.

Aranda, being an absolute savage and adding salt to the wound, decided to give his young kicker some confidence and had him attempt a 32-yard chip shot.

He drilled it, Baylor won by 13, and the fans rushed back onto the field as Riley was escorted to the locker room amidst a sea of green and gold.

The fans rush the field for a second time in Waco ⬇️ pic.twitter.com/pFYvdfQhBv

There will be a new No. 4 during Tuesday’s CFP rankings.