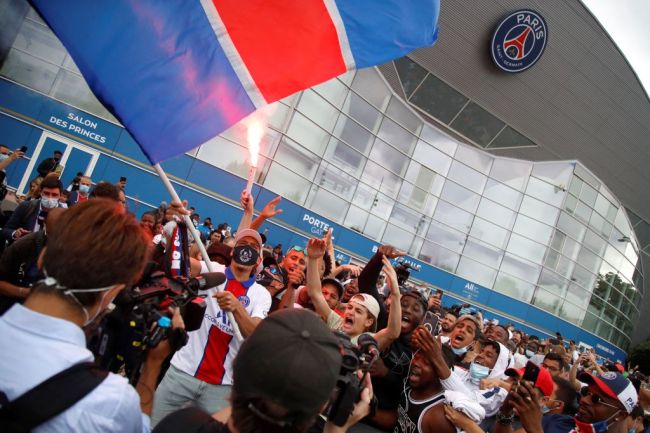 With his tearful departure from Barcelona behind him, Lionel Messi arrived in France on Monday to an unbelievable, rowdy welcome. The 34-year-old soccer superstar has signed with Paris Saint-Germain and was met by thousands of fans.

He left his home in Castelldefels to head to the Barcelona airport early on Tuesday morning. Fans gathered around his home to send him off.

People began to gather at the Le Bourget airport in Paris hours before Messi’s arrival.

Crowds of PSG supporters outside the Le Bourget airport in Paris to welcome Messi. 🐐👏👍✌️ pic.twitter.com/Imd5MIJqgC

Coverage around Messi’s every move was intense and the crowd went bonkers when his plane arrived.

Around 4pm local time, Messi poked his head from the window and greeted his new French fans for the first time.

It was an absolute madhouse.

People were setting off full-blown fireworks in celebration.

Messi eventually left the airport to another massive reception.

Before PSG could officially announce the signing, Messi needed to undergo a medical evaluation. He received a significant police escort as he pulled into the hospital.

Paris literally stopped for Messi and gave him the royal treatment.

When fans found out that Messi had left the airport, they took off to follow him.

Those who stuck around at the airport went absolutely bonkers when the transfer was made officials.

Meanwhile, at PSG’s stadium in Prince-Marmottan, the entire city showed up to welcome Messi home.

Messi is gargantuan man…. Mental turn out. And this isn't even his presentation, just his arrival 🤯pic.twitter.com/SCx3EfkDcd

Very few people in the world could receive a welcome like Messi. He is on equal standing with Ronaldo, the Pope and maybe the royal family. Insane.