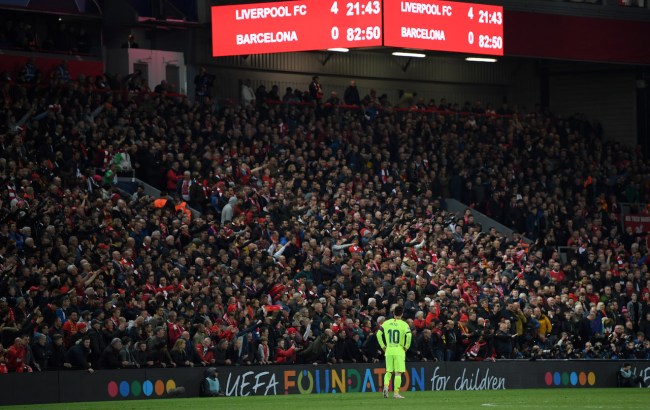 There are two types of people in this world: people who understand that Lionel Messi is the greatest soccer player of our lifetime and people who are complete fucking morons.

Miss me with that Ronaldo nonsense, y’all, because what Messi is able to do on a soccer field (or as we call it in the biz, “the pitch”) is truly unrivaled. Sure, Ronaldo may occasionally breathe the same air as Messi, but that’s about the only time that he can ever be considered his equal.

However, while Messi — who is already considered the greatest of all-time — may still have plenty of gas left in the tank, a recent rumor suggests that the Argentinean icon may trade his blue and red Barcelona stripes for the pink of Inter Miami in Major League Soccer.

According to Spanish outlet Mundo Deportivo, Messi is reportedly considering a shock exit from Barcelona for a move to MLS.

Barcelona captain Lionel Messi could leave Camp Nou for MLS, according to Mundo Deportivo. Messi has an annual exit option in his deal and the five-time Ballon d’Or winner could swap Spain for the United States.

It comes as the Catalan giants look to offer Messi – who has been linked to David Beckham’s Inter Miami franchise – a lifetime contract. [Yahoo]

Now, if you’re an MLS fan, I certainly wouldn’t hold my breath, as it would be *at least* two years until Messi makes the movie.

In the year 2022, Messi will be 35-years-old, which seems like a natural age to transition to MLS. And trust me when I say this: if a 35-year-old Messi made his way to MLS, it would be the biggest signing in the league’s history, as a 35-year-old Leo will still be one of the best players walking this planet.

If Messi is game, it would be an absolute coup for MLS.

P.S.: shout out to all the Liverpool fans out there who know why I used *that* particular photo as the lead image for this article. CORNER TAKEN QUICKLY ORIGI!!!