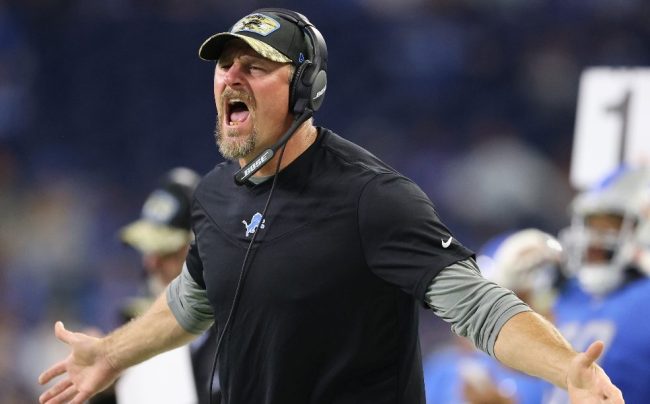 Football season is nearly upon us as the teams across the league are currently in training camp. This year’s season of HBO Hard Knocks features the Detroit Lions, which means we will be getting plenty of Dan Campbell content this preseason. The show hasn’t even aired yet and we already have a fired-up quote from Campbell that will have you ready to run through a brick wall!

Dan Campbell Is Not Messing Around!

Barstool Detroit shared a quick clip of the Lions’ head coach delivering a speech to the players. He has the entire room captivated, as everyone is focused on what Dan Campbell is saying. If you feel like attacking your day, give the video a quick listen!

“We’ll tread water as long as it takes to fucking bury you.”
pic.twitter.com/JbAdihi4Jz

If that doesn’t fire you up then nothing will. This is just a glimpse of what we can expect from Campbell and the Lions on Hard Knocks this year. HBO made the perfect choice in choosing this franchise, as Dan Campbell is one of the more intense coaches in the league. The man just lives, eats, and sleeps football and that’s all we can ask for with the regular season around the corner.

We’ll see how it plays out for Detroit. They didn’t do too hot last year but the franchise had a strong offseason. Many are rooting for the Lions to improve with Dan Campbell at the helm. If they can do that, then this team could be a sleeper pick to win the NFC North.

Make sure to tune into Hard Knocks on Tuesday, August 9. We’re sure to see Dan Campbell at his best throughout the Lions’ preseason.