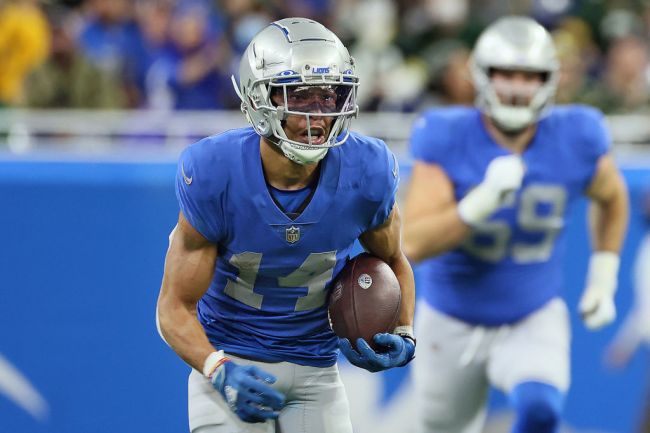 Throughout the 2021 season, it may not have seemed like there was much for the Detroit Lions to get excited about. They lost their first 8 games before finally working their way to a tie against the Steelers in Week 10. They finished the season with just 3 wins, earning the 2nd pick in the NFL Draft.

However, there was one bright spot that stood out near the end of the season. As the team struggled with injuries to key offensive players, rookie Amon-Ra St. Brown stepped up in a big way.

Over the final 6 weeks of the 2021 season, St. Brown became the focal point of the Lions’ passing attack. In those games, he racked up 51 catches for 560 yards and 5 touchdowns. That stretch also saw him make at least 8 catches in each of those 6 games.

Yesterday, Detroit Lions writer Tim Twentyman pointed out this streak gives St. Brown a chance to join some elite company in Week 1 of next season. Throughout NFL history, only Antonio Brown, Travis Kelce, Michael Thomas, and Anquan Boldin have made a least 8 catches in 7 consecutive games.

St. Brown may have a bit of a tougher time reaching 8 catches in his next game than he did in the last 6 of 2021. The Lions will have TJ Hockenson and D’Andre Swift at full health to start the season after they missed time at the end of the 2021 season. They have also added DJ Chark and Jameson Williams this offseason, although Williams could miss Week 1.

Despite the added competition, it’s clear St. Brown has built a rapport with Jared Goff and he’ll get a shot at making his mark on NFL history in just the 18th game of his NFL career.