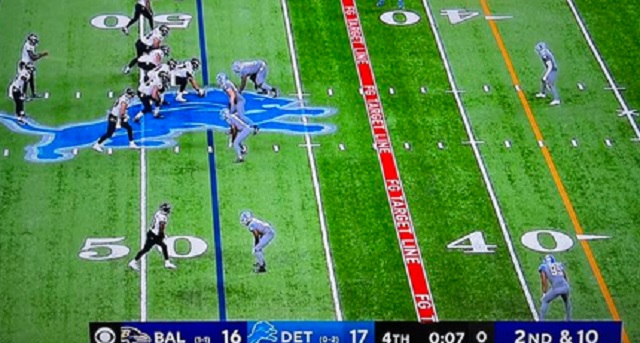 The Detroit Lions may have again gotten screwed by the refs on Sunday.

With seven seconds left in the game it appeared that the Ravens weren’t able to snap the ball before the play clock hit zero.

The Justin Tucker game-winning kick from 66 yards never should have happened. According to CBS broadcast graphic, this should have been a delay of game on Baltimore on the play before the field goal. #Lions #Ravens pic.twitter.com/YnVOuC3KXX

Unfortunately for the Lions the refs didn’t call a delay of game penalty and Justin Tucker went on to hit a historic 66-yard field goal to win the game.

Justin Tucker was literally BEHIND the logo on this kick pic.twitter.com/ZByTE9thuO

Lions fans were clearly not happy with the missed call.

Rigged. Should have been delay of game pic.twitter.com/6CGjiG8PMi