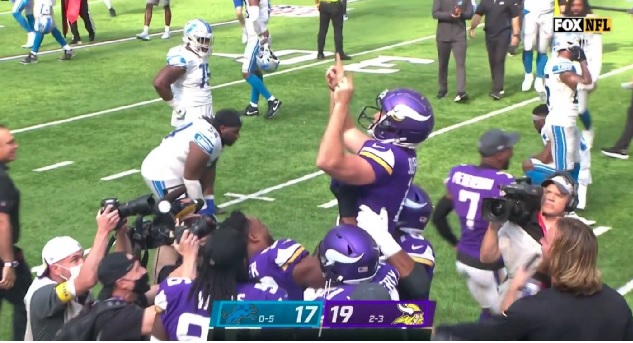 It’s not easy being a Detroit Lions fan.

Just a few weeks ago, the Lions were on the wrong end of a game-ending 66-yard field goal against the Ravens.

JUSTIN TUCKER ARE YOU KIDDING ME.

On Sunday, Lions fans really believed they were going to win on Sunday against the Vikings after taking the lead late in the game when the team was able to convert a two-point conversion.

#Lions score with Swift and then got the two-point play to take a 17-16 lead.

Unfortunately for Lions fans the Vikings were able to march down the field with 37 seconds left to hit a 54-yard game-winning field goal.

The #Lions curse is stronger than the #Vikings Kicker curse a Minnesota wins. pic.twitter.com/aYwcjwrEl7

Lions fans were absolutely sick after their latest heartbreaking loss.

– Come back against 49ers, but come up short
– Crushed in Lambeau Invitational
– Refs miss delay of game, Justin Tucker hits literal kick of god to win
– 4 turnovers in red zone
– Blow final drive to lose by field goal to Minnesota.

Life as a #Lions fan pic.twitter.com/pV2i9Txm6S

Detroit Lions is the real pandemic.

Twice this season The @Lions have lost on a last second 50+ yard field goals..they’ve only played 5 games. pic.twitter.com/K9BpBbPHYb