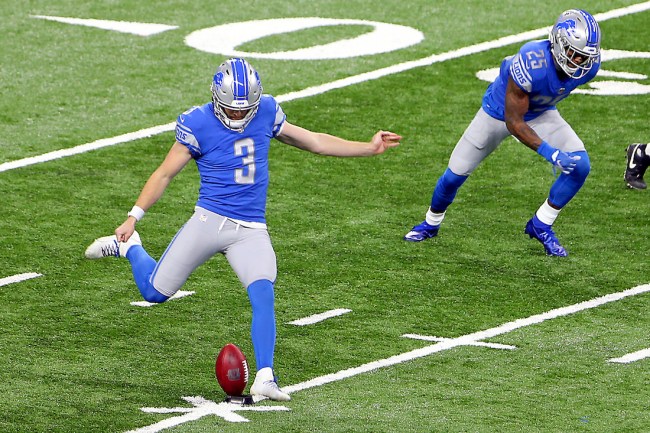 Being the Detroit Lions punter has been a busy job over the past couple seasons — and, yes, that was meant to be a complete dig on the NFC North franchise. While I’m not trying to be too harsh on the Lions, the fact is they haven’t won more than 6 games in a season since 2017. That’s some serious futility.

But just because the Lions haven’t shown to have great talent on the field, doesn’t mean they don’t have some bright minds off the gridiron. That was proven this week when the team’s punter, Jack Fox, took to Twitter to suggest an A+ NFL rules change that, no joke, the league needs to consider implementing.

According to Fox, he thinks the NFL offseason needs to make a drastic change, and reward teams one point for all kickoffs that go through the upright — which, c’mon, would be so dope.

Sure, there are plenty of NFL fans out there who probably think this is the dumbest idea on the planet, but I’m sure as hell not one of them. Seriously, imagine seeing a game where a team strategized perfectly to actually kickoff to the opposition, just hoping their kicker could sail the football through the uprights for a point. Talk about a tense situation.

Making things even more exciting with this idea is the sheer difficulty of hit happening. While we occasionally see a kicker crank one through an upright on a kickoff every so often, it’s not exactly a common occurrence — since kickoffs take place from over 80 yards from the uprights. According to Yahoo! Sports, only a few NFL kickers/punters even average 70 yards when handling kickoff duties, so rewarding them a point for distance and accuracy could be cool.

The logistics of accomplishing such a feat would extraordinary in itself. Not only are we talking close to an 80-yard bomb, but the kickers will have to have some accuracy to get the ball through the uprights at that distance. Out of the kickers, who attempted at least 60 kickoffs last year, only three averaged at least 70 yards: Tampa Bay P Bradley Pinion (72.4), Kansas City Chiefs K Harrison Butker (70.7), and Carolina Panthers K Joey Slye (70.2).

With the league looking at a few different NFL rules changes over the past few NFL offseasons, maybe they decide to do something fun (for once!) and add this whole kickoff point option? In a league known for being conservative and often referred to as the “No Fun League”, this idea from Lions punter Jack Fox would bring a whole new type of strategy to games, while also emphasizing the importance of a kicker with a cannon for a leg who just so happens to be accurate, too.

At least one person loves the idea from the Lions punter, Pat McAfee, who tweeted out his support and dream scenario as a former NFL punter himself.

I’ve had dreams of this Jack… Game tied.. 4 seconds left on the clock..

Kickoff thru the uprights would win it.

The anxiety.. the execution.. the CELEBRATION after.

The stadium would go BANANAS on a walkoff 79+ yard BOMB to win it. https://t.co/fEcFQKPlwm

OK, Roger Goodell and the NFL rules committee, it’s time to shake things up and make games even more exciting before the next year. In an already crazy NFL offseason, this might be the wildest move — if it ever actually got serious consideration. Let’s. Go.