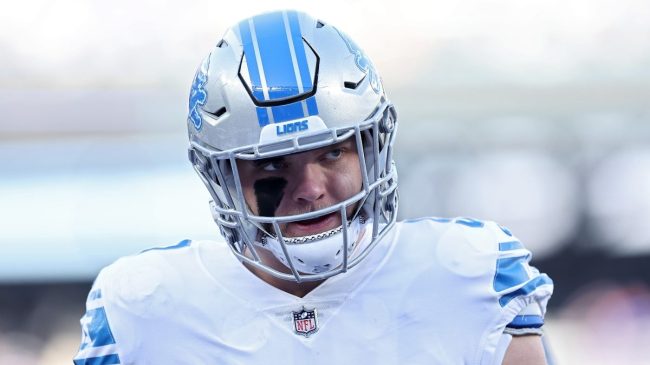 The Detroit Lions took it to the New York Giants as the defense stepped up in a major way yet again. This was a big win for this franchise, as they’ve gotten themselves back to a 4-6 record. However, all eyes are on rookie defensive end Aidan Hutchinson, as he’s already made NFL history.

According to NFL on CBS, the Lions’ rookie defensive end recorded his third interception on Sunday. Additionally, he’s recorded over three sacks on the year as well. That makes Aidan Hutchinson the first player in NFL history to record such numbers in a single season.

Not only rookie.
Only player. pic.twitter.com/eh4KGEEnA2

Considering he plays at the line, it’s incredible that he’s recorded three picks this season. He’s been a bit of a ball hawk lately which only helps the Lions overall. Because of him, Detroit’s defense has looked much better in recent weeks. If Hutchinson continues playing like this, he’ll surely be in the running for Defensive Rookie of the Year.

It’s hard to ignore the Lions rookie, as he’s been a stud defensive end so far this season. Regardless, the fans are beyond thrilled with his performances. Perhaps change is on the horizon in Detroit after all.

It’s crazy that some people were saying about Aidan Hutchinson before the Draft.

Might just be a two-man race at this point

It’s between him and sauce for DROY

Look for Aidan Hutchinson to continue playing at a high level as he helps the Lions turn things around. If they can keep winning games, then the franchise can consider this season a success. Tune in for Week 12 as Detroit faces off against the Buffalo Bills in what will be a tough matchup.