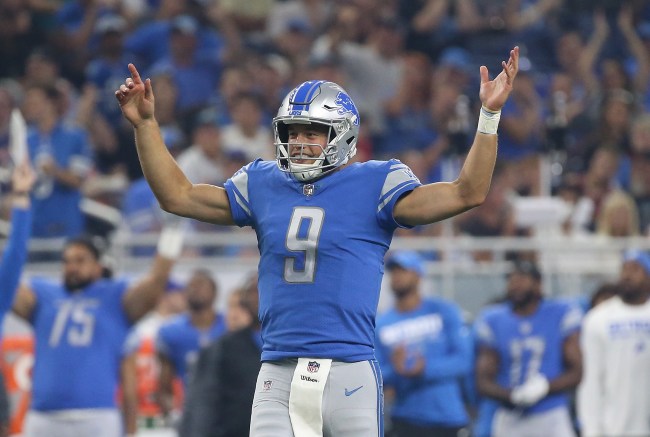 DETROIT, MI - AUGUST 19: Matthew Stafford #9 of the Detroit Lions celebrates a second quarter touchdown during the preseason game against the New York Jets on August 19, 2017 at Ford Field in Detroit, Michigan. (Photo by Leon Halip/Getty Images)

We have our first blockbuster trade of the NFL offseason.

On Saturday night, the Detroit Lions sent Matthew Stafford to the LA Rams in exchange for Jared Goff and a slew of picks.

Sources: The #Lions are closing in on trading franchise QB Matthew Stafford to the #Rams in a blockbuster deal, per me and @TomPelissero. Jared Goff is headed to the #Lions.

Full terms of the deal: It’s Matthew Stafford to the #Rams for 2 1st rounders and a 3rd rounder, along with Jared Goff.

The two first-round picks the Rams are giving up for Stafford will be 2022 and 2023, since picks beyond three years out can’t be traded and since the Rams have no first-rounder in 2021.

The initial impression from NFL fans is that the Rams overpaid for Stafford by trading three picks for him.

That’s hella picks to give up for… Matt Stafford. Jah bless https://t.co/ThauF4mmBK

Feels like the #Rams overpaid, but they clearly don’t value first-round picks at all.

If Matt Stafford cost 2 firsts, a 3rd, and Jared Goff, think of what Deshaun Watson will cost