Little Orioles Fan Throws Ball On The Field, Fans Rally To Get It Back To Him 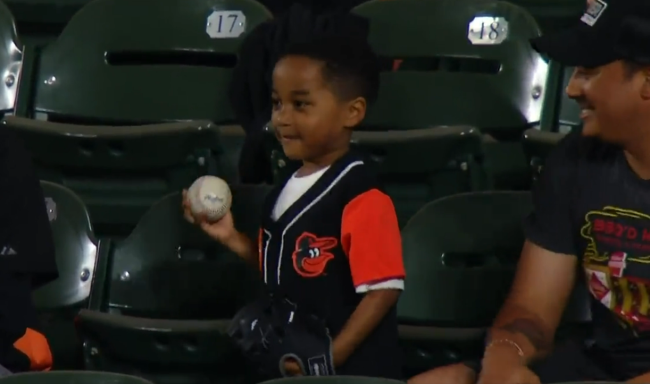 The Baltimore Orioles vs. New York Yankees game at Camden Yards on Monday produced one of the best baseball moments you will probably ever see. And it had nothing to do with the game itself.

During the bottom of the 8th inning with the Orioles at bat, a little Orioles fan, wearing a big button that said he was attending his very first game, got himself a baseball.

Being a little kid, he then did what comes naturally when handed a baseball – he threw it. He threw it far. He threw it so far that Yankees outfielder Aaron Hicks had to go retrieve the baseball because it ended up on the playing field.

Hicks, not knowing or caring where the ball came from or how it got on to the field, picked it up and launched it back into the stands. His throw, naturally, went nowhere near where the ball originated: in the hands of the little Orioles fan.

The whole time this was going on the announcers did some tremendous play by play of the situation.

“Don’t throw it,” one of the said, knowing full well what was about to happen.

“He wants to fire that thing, I promise you, he wants to….”

“I could just tell. The look in his… the dad’s like ‘dude, what are you doing?’ But I’m just going to tell you from experience, if you give a five year-old a baseball, they gonna sling it somewhere. I’m just telling you.”

Incredibly, one of the fans near where Hicks threw the ball back into the stands noticed that it came from the little Orioles fan and pointed him out.

He was answered shortly thereafter when a fan did actually end up giving the ball back to the little boy.

And the crowd went wild!

🚨 UPDATE!!! – the ball got thrown back into another section and the Orioles fan returned it to the kid. The crowd literally went wild 😂 pic.twitter.com/wSAlFjiavJ

Just a kid and his baseball 🤗

Watch it all unfold ⬇️ pic.twitter.com/jkJGIHEEy2

Fans, as they should have, absolutely loved it.

In tonight's installment of Good Deeds in Baseball.... https://t.co/oadjvgpuyc

I would watch a 13-episode @netflix series about this.

This is why people love baseball man

A full Sophoclean tour of the human condition in one baseball clip. https://t.co/ulE8pfio5p

baseball is the best https://t.co/h7dLxWeYQ4