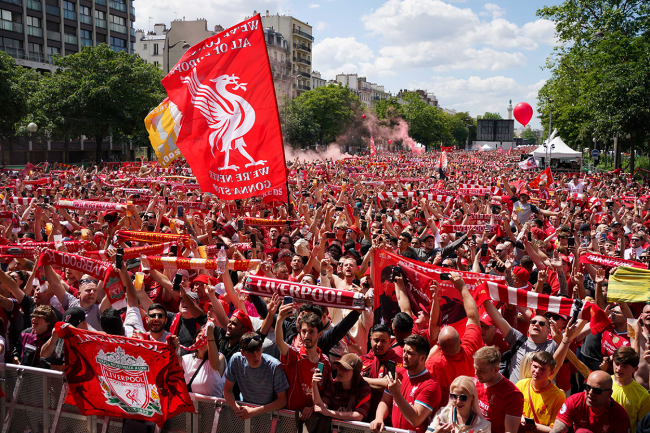 Liverpool Football Club is set to face Real Madrid in the UEFA Champions League Final on Saturday afternoon at Stade de France just outside of Paris. As the two sides prepare to square off for the second time in four years, the Liverpool supporters are getting rowdy.

The team hosted a tailgate outside of the stadium prior to the match and thousands upon thousands of fans showed up. Equipped with flags, smoke bombs, full voices, and presumably plenty of booze, the scenes were incredible.

The atmosphere is building at our #UCLfinal fan meeting point 😍 pic.twitter.com/RZAZsCl5XU

And then the real fun began.

The hits started coming, starting with ‘Freed from Desire.’ It was absolutely lit.

The Reds are having the time of their fucking lives in Paris! 🔴 pic.twitter.com/3YylE5w6yk

The highlight of the afternoon, however, came with One Kiss, literally.

Back in May of 2018, Liverpool played Real Madrid in the Champions League final— as they would meet again on Saturday. Prior to the match, Dua Lipa was selected to play the opening ceremony.

Dua Lipa, although not originally a supporter of the Reds, is from England. So when she came out to perform her smash hit ‘One Kiss,’ she had all of the Liverpool supporters in her court and they sang their hearts out.

The song has been adopted by the club and its fans ever since.

Thus, when the band started to cover the Dua Lipa song on Saturday, ahead of Liverpool’s UCL Final rematch against Real, the supporters went bonkers. It was electric.

Wait for the drop… pic.twitter.com/HiEIApnzm0

Win or lose, the pregame scenes were immaculate. Hats off to the Reds for showing up and showing out.