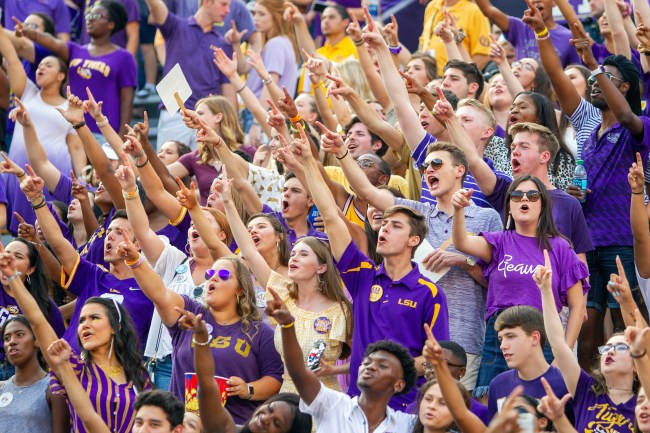 This week LSU fans descended into Nashville, Tennessee for the team’s game against SEC rival Vanderbilt.

There's a lot of Purple and Gold in Nashville! pic.twitter.com/kucjF8fAlr

Walking around outside and now seeing the stands, #LSU fans have taken over Nashville. There’s purple everywhere. pic.twitter.com/Umts8hyxDh

Not only did the LSU faithful take over Vanderbilt stadium but they were also wreaking havoc around the city and drying up bars with their excessive drinking.

In case you were wondering just how many LSU fans made it to Nashville: There’s a Fred’s flag hanging up at The Local. pic.twitter.com/5UIDxeIuit

UPDATE: They have grossly underestimated the LSU fan base and the bar has already run out of vodka 40 minutes after opening.

Drinking a bar dry of their vodka inventory at 9am is a pretty fucking impressive feat.

You know LSU’s in town when the bar runs out of vodka less than an hour after they open 🤦🏼‍♀️ https://t.co/I1GkKxlBmQ

Update: Apparently LSU fans drank all of the beer in Vanderbilt stadium too.

Story of the day: Vandy’s concession stands ran out of beer. The LSU fans were lined up a mile long to buy some. When the delivery guy showed up with more beer the LSU fans gave him a standing ovation.