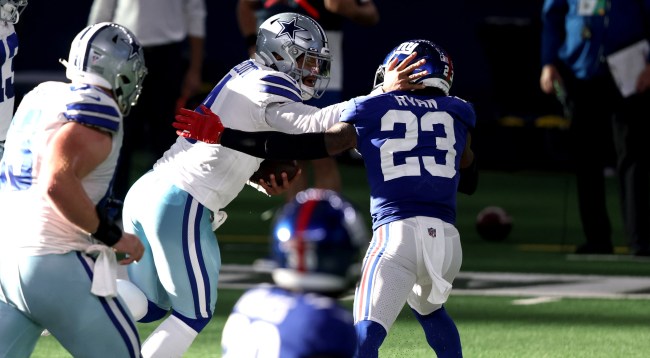 New York Giants’ defensive back Logan Ryan was very emotional following Sunday’s game versus the Dallas Cowboys, saying he feels “terrible” about the tackle he made that in the compound fracture and dislocation of Dak Prescott’s ankle.

“First and foremost, the worst thing that happened today was the Dak injury, bigger than football,” Ryan told the media after the game. “I feel terrible. It was a routine football play.

“Look, I studied a lot. I thought this game would come down a lot to me and Dak. I know it’s a team game but my job and this game plan was make it tough on Dak and he made it really tough on us.

“That was nothing but a routine tackle. Two competitors, he’s trying to stiff arm me, I’m trying to tackle, punch the ball out. When I saw it, I saw it immediately. I broke my fibula, I broke my leg two years ago and I came back a better player and I just wanted to wish him well.

“Obviously, there was no malintent there. I went through a similar injury a couple years ago. I just told him, ‘What would Kobe do?’ I hope he comes back. I hope he gets $500 million, he deserves it. Honestly, that was the worst thing that happened today. I’ve got a sick taste in my stomach for it because he was playing a hell of a game. It was a hell of a battle between us.”

Prescott underwent surgery for a compound fracture of his right ankle and a dislocation Sunday night and it reportedly went well. He is expected to be released from the hospital on Monday and is looking at possibly being able to return to participation in football activities in four to six months if all continues to go well.