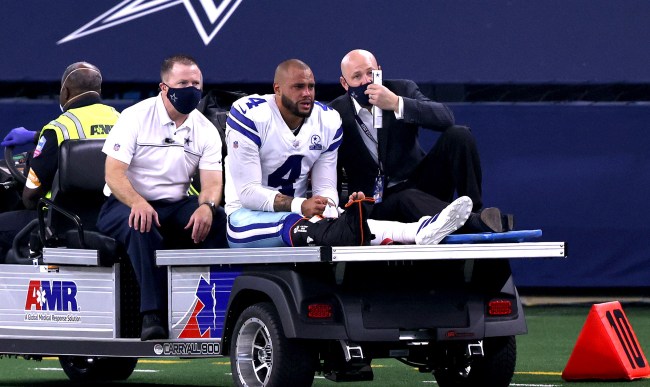 Sunday night, Dallas Cowboys quarterback Dak Prescott underwent surgery for a compound fracture of his right ankle and a dislocation. It reportedly went well (though it still isn’t a “blessing in disguise.”).

After starting all 69 games in his NFL career, Prescott now faces several months of recovery and rehabilitation once he is released from the hospital – something which is expected to occur on Monday.

Cowboys’ QB Dak Prescott is now out of surgery for a compound fracture and dislocation of his right ankle, and the surgery that went “very well”, per a source. Cowboys Head Team Orthopedist Dan Cooper brought in noted foot and ankle doctor, Gene Curry, to do the repair tonight.

Prescott’s brother Tad shared a photo from the hospital Sunday evening and Dak was smiling and appeared to be in good spirits.

Dr. T.O. Souryal, former Dallas Mavericks head team physician for 22 years and current medical director at Texas Sports Medicine and Orthopedic Group, who did not work on Prescott’s injury, told The Athletic that based on what he saw and reports from the hospital, while Dak’s injury is serious, it is still “very treatable.”

Souryal believes the timeline for the 27-year-old Prescott returning to participation in football activities is going to be in the range of four to six months.

“I am optimistic for several reasons,” Souryal told The Athletic. “I’m optimistic because Dak is healthy, he’s young, he’s in good physical condition, he will be getting the best medical care available, he will get the best rehabilitation and physical therapy available and he has access to the most modern equipment available. Factor all of that stuff together, I am optimistic that his recovery will be uneventful.”

As for whether Prescott’s leg injury is similar to another quarterback who made news on Sunday related to a gruesome leg injury, Alex Smith…

The answer is no. Aside from both being classified as compound fractures, the Prescott injury and Smith injury are completely unrelated. The biggest difference, of course, is that the fractures took place in different parts of the leg. Smith’s compound fracture was to his tibia and fibula (tib-fib). Prescott’s injury is to his ankle. This is significant to classify because the ankle is a joint while the tib-fib is not. Because of this, there is a dislocation component to Prescott’s injury that didn’t exist with Smith — or former Washington Football Team quarterback Joe Theismann, for that matter. On the plus side — and it’s a significant plus — for Prescott’s situation, the ankle joint has really good blood supply. Even though it was open, it has a much better chance to heal uneventfully. Smith’s recovery was eventful and took longer.

“My experience is that this is a very treatable injury with an excellent chance for recovery,” said Souryal.