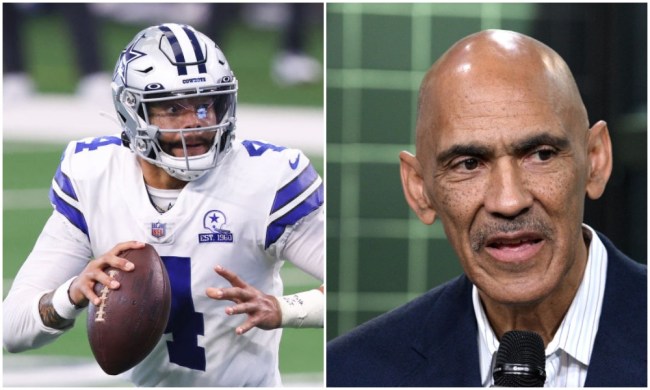 Dak Prescott suffered a compound fracture and dislocated right ankle during the Cowboys’ win over the Giants on Sunday. To say the injury was gruesome would be an understatement, legs and ankles aren’t supposed to do what Prescott’s did. Injuries like the one he suffered can alter careers.

The entire sports world reacted to Prescott’s injury with most sharing their concerns and well wishes for the quarterback. While Tony Dungy did the same, he then flipped the conversation into what the injury means for the Cowboys for the rest of the season and said that the injury “could be a blessing in disguise.”

A potentially life-changing injury in which someone’s ankle and foot are pointed in the wrong direction can’t be a “blessing in disguise.”

Tony Dungy says that the Dak Prescott horrible injury "might be a blessing in disguise for the Cowboys."

This is one of the worst takes in sports history. If Dungy would have simply offered his well wishes and then said that the Cowboys may be okay with Andy Dalton under center for the rest of the season would have been fine, but to say an injury is a “blessing in disguise” is brutal.

Sure, we all misspeak sometimes, but we don’t say things like that on national television.

Dungy hopped on Twitter afterward and explained that “blessing in disguise” was a poor choice of words.

Blessing in disguise was a poor choice of words by me. It’s not a blessing for Dak. What I meant was that for the Cowboys the season is not over. Andy Dalton is very capable and changing the focus back to Elliott could help the defense. But I feel very badly for Dak. https://t.co/MKA9TpzbKW

Prescott was having a strong season before he went down with his injury. The former Mississippi State quarterback had 12 total touchdowns to go along with 1,856 passing yards while completing 68% of his passes.