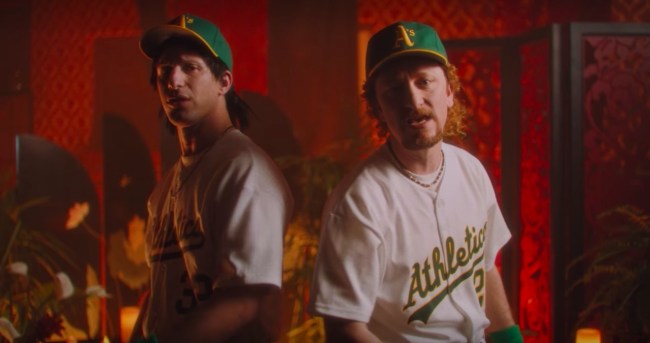 You can call me an uncultured swine if you so choose but I have no problem admitting I’m not a huge fan of musicals.

Sure, the La La Land soundtrack slaps and Sweeny Todd has at least a couple of bangers but I’ve just never been able to suspend my disbelief when it comes to a massive group of people breaking out into a carefully choreographed song and dance routine when a few lines of dialogue could have gotten the same point across.

However, I’m willing to make an exception for The Lonely Island.

The comedy group—which consists of Andy Samberg, Akiva Schaffer, and Jorma Taccone—made a name for itself by pumping out jam after hilarious jam on Saturday Night Live before moving onto bigger projects like the fantastically underappreciated Popstar: Never Stop Never Stopping, which features what may be their finest work.

“I said he wasn’t in a cave” gets me every single time.

As a longtime fan of the group, I got pretty amped on Wednesday when they announced they were planning on dropping a “visual poem” on Netflix, and folks, they might have just managed to top themselves.

Last year, The Lonely Island debuted a new song inspired by The Bash Brothers, the nickname that Jose Canseco and Mark McGwire were given during their steroid-fueled stint with the Oakland Athletics.

However, it turns out that was just a preview of what was yet to come, as the visual poem in question turned out to be a musical titled The Unauthorized Bash Brothers Experience, which chronicles the rise and fall of the duo.

Samberg plays Canseco and Schaffer steps into the cleats of McGwire for the 30-minute project, which features a number of catchy numbers chronicling the Bash Brothers saga (Taccone also gives provides a hilarious interpretation of Joe Montana).

Is this song what sex is? @thelonelyisland pls advise pic.twitter.com/LljG8giGEF

If your funny bone needs some tickling, I can’t suggest it enough—and neither can Canseco himself.

@thelonelyisland just watched The Unauthorized Bash Brothers video! I can't stop laughing. Loved it. If you want to do a follow up video contact my Manager Morgan: 7023743735

I can only hope that collab comes sooner rather than later.