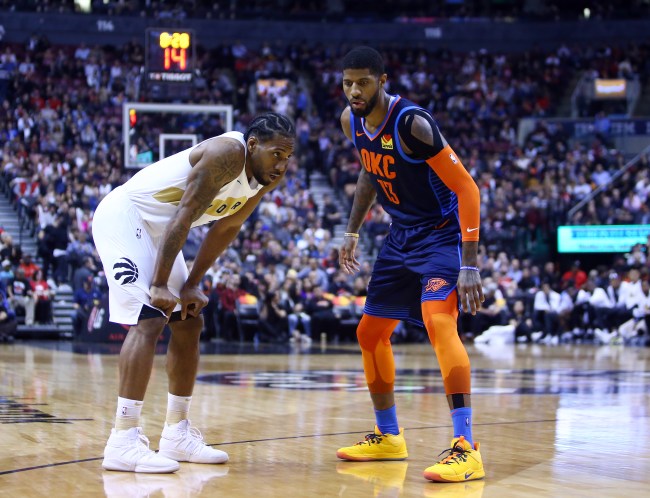 The Los Angeles Clippers made a huge splash this offseason when the team was able to acquire both Kawhi Leonard and Paul George, which instantly puts “that other L.A. team” in to the championship conversation. And while Leonard has proven himself to be an absolute superstar — having won two titles and reaching the NBA Finals three times in his career — the verdict’s still out on if George can play second banana to a polarizing star like that and actually win a championship. It didn’t happen in the two years alongside Russell Westbrook on the OKC Thunder, so only time will tell how this Clippers experiment turns out.

While every Clippers fan is stoked about the possibilities that Leonard and George present, it’s important not to get too carried away with what these two could become. Sure, they’re both great players, but only Leonard has ever won anything, so let’s not declare these two the next best thing as sliced bread.

Unfortunately, not everyone can hold back the high expectations for the new Los Angeles Clippers duo, because, according to a piece in The Washington Post, one NBA executive actually mentioned Kawhi Leonard and Paul George in the same breath as (gulp) Michael Jordan and Scottie Pippen.

“I’m not saying Kawhi Leonard is Michael Jordan and I’m not saying Paul George is Scottie Pippen,” the Clippers executive told Ben Golliver of The Washington Post. “But you have to go all the way back to those guys to find two [perimeter players] who can score the ball and hound their men like this.”

For those who forget, Jordan and Pippen won six NBA titles together, so, yeah, it’s hard to say that Leonard-George are already on that same level after just two weeks of being on the same team together. But, you know us, we all love comparisons.

Sure, the executive was quick to pump the brakes a bit by saying the new Los Angeles Clippers’ duo aren’t equal to the two Basketball Hall of Famers, but, still, just mentioning them in the same breath probably should be avoided at all costs. Maybe something like LeBron James-Dwyane Wade while together on the Miami Heat would be a more realistic comparison, no?

Bottom line is this: Unless the Los Angeles Clippers win multiple championships — not one, not just two — with Kawhi Leonard and Paul George together, nobody will ever remember them as being an all-time great pairing. No pressure or anything, fellas.