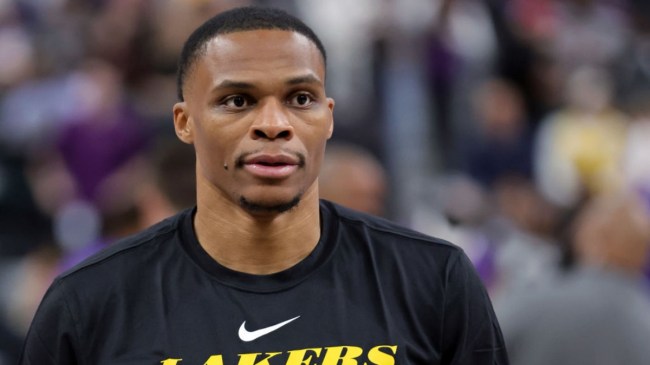 After spending all offseason trying to find a trade partner to take on Russell Westbrook, the Los Angeles Lakers still find themselves with the point guard on their roster.

His first season with the team didn’t work out particularly well, with him struggling to shoot the ball and even getting benched late in some games. The team also had a rough year, finishing 33-49 and missing the playoffs.

Now it looks like the Lakers are ready to test out something new to see if they can get a better year out of Westbrook in his second season with the team. According to a report from ESPN’s Adrian Wojnarowski, the Lakers are going to try having Westbrook come off of the bench for their final preseason game tonight.

ESPN reporting with @Mcten: The Lakers are planning to bring Russell Westbrook off the bench in the final preseason game vs. Kings tonight (ESPN, 10 ET). Darvin Ham and Westbrook have been exploring possibility of Westbrook quarterbacking second unit and they'll try it tonight.

Wojnarowski added that the Lakers are hoping the change would allow Westbrook to play more freely and will prevent him from having to play off the ball as much as he does with the starting lineup.

There's a hope that Westbrook can play freer and faster with ball in his hands on second unit — and have to worry less about fitting away from ball around the starting group. It is certainly an idea they'll continue to discuss with start of regular season next week.

Maybe this is the solution the Lakers have been looking for. Westbrook just hasn’t seemed to mesh with the starters, but he could be a valuable asset off the bench. While he no longer plays at the superstar level he once did, Westbrook would still be able to give the Lakers an edge against other benches.

The Lakers will get their first look on how this change would work in tonight’s game and it could be something they continue to tinker with early on in the regular season.