Louisiana’s Long Snapper Got The Yips And Its Head Coach Made A Questionable Clock Management Decision, But A Shanked Field Goal Won Them The Game In A Wild Finish 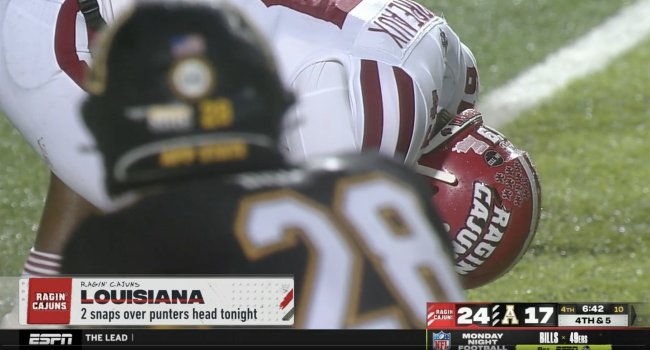 No. 25 Louisiana had only lost one game this year to undefeated No. 18 ranked Coastal Carolina before its game against 7-2 Appalachian State, but the Mountaineers had never lost to the Ragin’ Cajuns in their program’s history. It was the visiting team that broke the streak in dramatic fashion on a rainy Friday night in Boone, N.C..

Head coach Billy Napier, a Nick Saban disciple, and his team had every chance to win the game, but four plays primarily made the main difference in how it came down to the final seconds. App. State scored first and led 10-9 at the break.

Long snapper Paul Boudreaux (if you have never scrolled through UL’s roster, take some time to do so, the names are glorious), snapped the ball well over the punter’s head with 10:24 left in the first quarter. The play should have been ruled a touchdown, but the officials made a poor call. It was the start to a long night.

Less than nine minutes later, he did it for a loss of 38 yards.

He botched another snap on an extra point attempt in the second quarter that didn’t allow Louisiana to get the kick off and wasn’t done there.

Even with all of the mistakes, the Cajuns held tough defensively and scored two unanswered touchdowns to take a 24-10 lead. The Mountaineers forced a three-and-out on the following drive, forcing Boudreaux to go to work again. Sent it sailing for a safety.

App. State couldn’t convert a 4th-and-goal and the chaos continued. Napier’s offense took over. Facing a 4th-and-2 shortly thereafter, instead of sending his long snapper back out there, the former Saban assistant and quarterbacks coach under Dabo Swinney called an intentional safety. The move was questionable, as it left the door open for a game-tying field goal and closed a five-point lead to three.

With a chance to win the game, quarterback Zac Thomas led a drive to the opposing 13 yard line to set up a 30-yard effort. In typical Fun Belt Sun Belt fashion, with a rain-blurred camera and all, the kick missed wide left and gave Louisiana its ninth win of the season.

By breaking the curse, Napier and the Cajuns clinched their division and are set up for a rematch with the Chanticleers. Coastal will face undefeated BYU this weekend with College Gameday in town and a win over the Top 10 Cougars would make next weekend even more fun.

Monday’s film session will be rough for Boudreaux, though the blow is slightly lessened by the result.