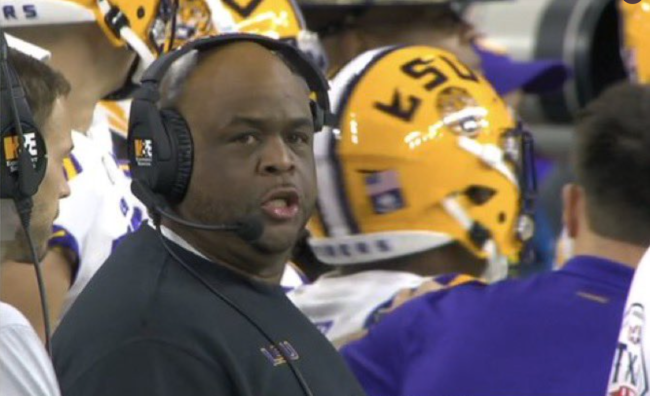 LSU head coach Ed Orgeron was fired on October 17, 2021, but remained in his role until the end of the regular season. The lame duck Ed O era was hilarious because he simply did not care at all, but it almost did not end with a winning record.

At 5-6 with one game left in the regular season, the Tigers had to upset the No. 23-ranked Texas A&M Aggies to reach bowl eligibility and they did. However, Orgeron decided to end his career in Baton Rouge despite having one game left if he wanted it.

As a result, offensive line coach Brad Davis took over as the interim. He was dealt a difficult hand between transfers, opt-outs and turnover around the building as Brian Kelly’s staff came in, but he considered the title an “honor” nevertheless.

The decision to appoint Davis was also historic. He became the first black head coach in school history, even if only for one game.

Thus, despite playing in the last bowl game of the year with a limited roster, Davis was thrilled.

What he didn’t know was that he would end up being dealt a very difficult hand. Only 39 scholarships were available for LSU come kickoff and the team was forced to start a former high school quarterback-turned-wide receiver at quarterback. It was rough.

Prior to the game, Davis spoke about the game and had a hilarious comparison for what life will be like when the game clock hit zero.

Brad Davis is a pumpkin pic.twitter.com/JzwJZkS6SO

Win or lose, the opportunity meant a lot to Davis and he had a lot of fun in the process.