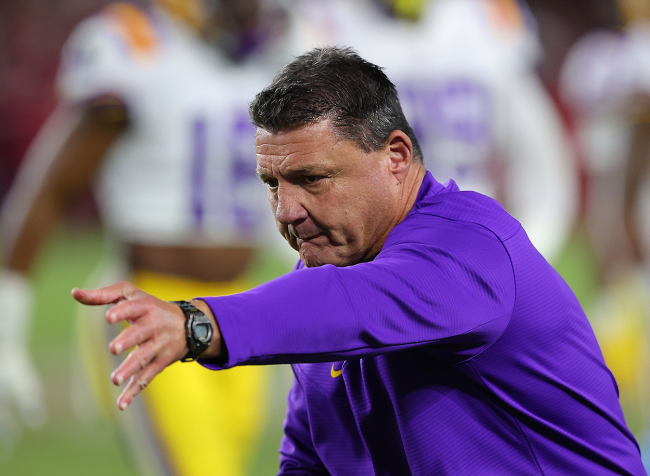 LSU football has two games left in the Ed Orgeron era. The Tigers need to beat both Louisiana-Monroe (that will happen) and Texas A&M to earn a bowl victory, but Coach O doesn’t seem particularly concerned about how his season ends.

Orgeron, of course, was fired by the program on October 17th. He and the school agreed to let him finish out the season, but fired him without cause.

As a result, Orgeron will get paid $16.8 million not to coach at LSU. He made it immediately clear that he looks forward to a little time off in the announcement press conference.

Since then, Orgeron has displayed hilarious body language against Ole Miss, was totally daydreaming during a press conference, and reached a new level of simply not giving a f**k against Alabama.

Win or lose, Orgeron’s fate is already sealed. He is fired.

A lame duck is defined as the following, according to Oxford Languages: “an official (especially the president) in the final period of office, after the election of a successor.” Thus, by definition, Orgeron is a lame duck.

However, it was not expected that he would admit to that fact.

But he did and it was savage.

Throughout the year, Orgeron has blamed a lot of LSU’s downfalls on everything from the play-calling to the way players are deployed in the scheme. All of that falls on offensive coordinator Jake Peetz, with whom Orgeron has made a consistent punching bag over the past few weeks.

Things are so bad, reportedly, that Peetz left practice in frustration a few weeks ago.

Because of the amount of times that Orgeron has said Peetz’s name throughout the season, he was asked on Monday about the perception that he is throwing his offensive coordinator under the bus. Orgeron did not hold back.

“There ain’t no bus over there where I live,” he said. “I just tell the truth and that’s the truth. We should have put them in better position.”

Orgeron went on to make an extremely honest admission. He said, verbatim that he’s a lame duck.

#LSU Head Coach Ed Orgeron on the team's offense:
"I think they're pissed…I just tell the truth, we gotta put the guys in a better position….those that write that…later (waves hand)…you can say that when you're a lame duck coach…" #LSUOdyssey

There you have it. Orgeron knows the position he is in. He is leaving LSU in two weeks and is not afraid to go out how he wants, burning every bridge behind him.

We knew that Orgeron was a lame duck. But for him to straight-up admit it is truly unprecedented.