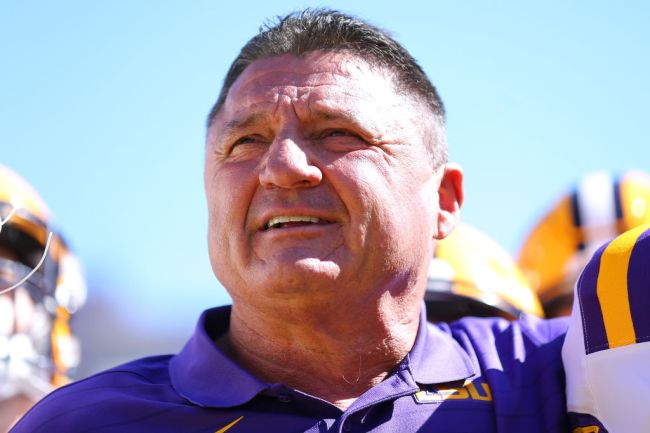 Ed Orgeron literally has nothing to lose. The 60-year-old has already agreed to step down as head coach of the LSU football team after this season, so the old adage, “what are they going to do, fire me?” is as literal as it gets for Coach O.

That was very clear during the Tigers’ loss to Ole Miss on Saturday.

You see, earlier this week, Orgeron was fired without cause. That means that after this season, he will get paid the remainder of his $17.8 million salary not to coach in Baton Rouge.

He spoke with the media after the announcement and did not seem too shaken up over the situation. In fact, when he was asked about his future, he made a direct reference to the amount of money he is about to make to be unemployed.

As a result of his soon-to-be, already agreed upon ousting, Orgeron is coaching the rest of 2021 without a care in the world. Sure, he would like to win and make a bowl game on his way out, but if he doesn’t— there are zero ramifications.

He certainly coached like it against Lane Kiffin and the Rebels.

Remember, Orgeron coached at Ole Miss in the late 2000s, so it was his last game against his former team and his last game coaching against Kiffin, with whom he has coached alongside with at USC (twice) and Tennessee. He could not have seemed more stress-free.

Throughout the pretty definitive loss, the camera would cut to Orgeron on the sideline and his body language was hilarious.

Early in the game, while it was still in reach, Coach O chose to go for it on fourth down and was successful. Here was his reaction:

And then, when the game was all-but over in the third quarter, Orgeron looked completely relaxed. He might have even cracked a smirk.

When they say “you’re fired” but you already quit pic.twitter.com/YgeAS02oPR

The rest of this year, which will be Coach O’s farewell tour, is going to be extremely funny. He has four games left and potentially a bowl game.

It is very clear that he is going to enjoy every moment, knowing that he has a national championship ring already and $18 million on his way.