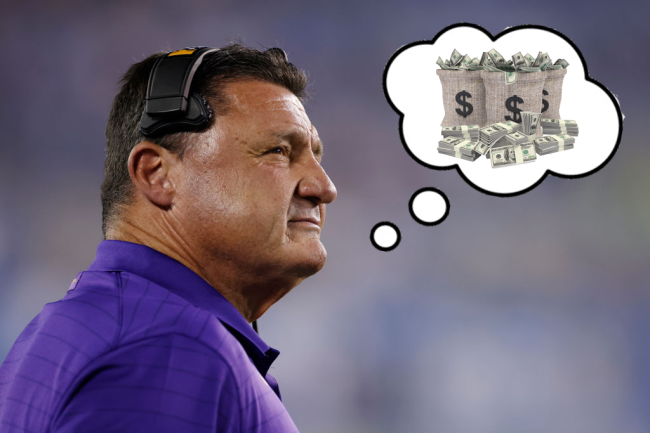 In the ultimate fall from grace, Ed Orgeron is out as the head coach of Louisiana State football. It was announced on Sunday that the 60-year-old and the school agreed to separate after this season, but Coach O couldn’t seem less concerned.

Obviously, Orgeron would prefer not to be fired. Especially just 21 months after winning a national championship— which is unprecedented.

However, with how much money he is making from the agreement, he isn’t particularly worried about his future. Because both sides agreed that he is being removed “without cause,” LSU will pay Orgeron his fully guaranteed amount of money.

As such, he is set to receive $16.8 million from LSU over the course of the next four years. You read that right: Orgeron will get paid $4.2 million per year not to coach football in Baton Rouge.

When he was asked about his plans beyond 2021, Orgeron gave an incredibly ruthless response.

“Ed, do you plan on coaching next year?” asked a reporter during Sunday’s press conference.

After a quick and definitive “no,” Orgeron answered:

“I want to take a little time off,” he said. “You know, I’m 60 years old, I’ve coached for 37 years. I think imma have enough money to buy me a hamburger. And every once in awhile — maybe a double meat cheeseburger from Sonic.”

Look at the slick smile on his face as he said it:

Coach O is getting paid and he knows it. Fired football coach is quite the gig if you can get it.