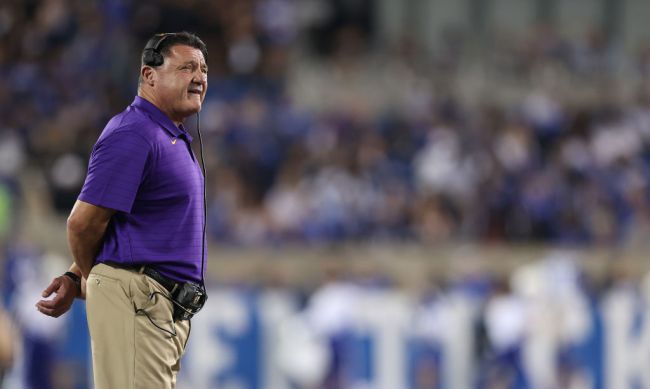 It wasn’t a matter of if, but a matter of when LSU would part ways with head coach Ed Orgeron. We now know, thanks to a report from Sports Illustrated’s Ross Dellenger, that Coach O will be out as the Tigers’ head coach at the end of the 2021 season.

LSU and Orgeron have reached a separation agreement saying that Orgeron is expected to complete this season as head coach, but will not return next year.

The timing here is extremely interesting given the fact that LSU is just hours removed from an upset win over Florida, but according to the report, negotiations about separating began last week. Orgeron led Joe Burrow and the Tigers to a national championship just 21 months ago.

#LSU and Ed Orgeron have reached a separation agreement: He will not return in 2022 but expected to complete this season, sources tell @SINow.

It’s unprecedented in the sport – coach & school divorcing 21 months after winning it all.

LSU still deciding to force Orgeron out, even after a win against a ranked Florida team, just shows how different things are in Baton Rouge. The writing was on the wall, and it doesn’t matter if Orgeron led his team to more wins to close out the year, LSU is done with Coach O.

A source familiar with the situation at LSU: “It’s one of those things where no one wanted to be there anymore. The players didn’t want to play for him, the coaches didn’t want to coach for him.”

The coaching search at LSU is going to be absolutely bonkers. LSU is undoubtedly a Top 10 job in all of college football, so expect to see big-time names floated around as to who may come in to replace Orgeron. The LSU job is also one of the most pressure-packed positions in college football, with this news of the Orgeron split being just the latest example of that. The ‘what have you done for me lately’ mentality exists at every SEC school, but even more so in Baton Rouge.

Some college football fans on Twitter are questioning LSU’s decision here, while others think the move is a solid one.

I just don’t think Ed Orgeron was given a fair deal after winning the championship. How many times have coaches won and then they automatically get like 5 years? Idk who you are getting that better represents Louisiana.

If i was a coach anywhere i would not go to LSU that's absolutely hideous. Win a national title then out a year and half later. 2020 was Covid year only teams that took that year seriously was Alabama and a few others.

The "what have you done for me lately" culture. Wish LSU nothing but the worst. Let's see how quickly that young blonde ditches Coach O as well.