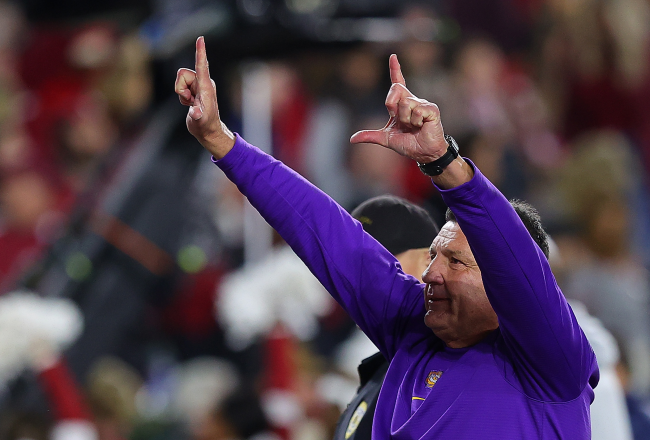 We should all aspire to live our lives with as free and easy of an attitude as Ed Orgeron has about doing literally anything these days. The current, already-fired head coach of Louisiana State football simply has nothing to lose and he knows it.

The 60-year-old was fired without cause, so he will make $4.2 million to not coach the Tigers. He is well aware of how much he is getting paid to take some time off and was very clear in his first press conference after being fired that he looks forward to a vacation and a cheeseburger.

A week later, his body language could not have been funnier on the sideline against Ole Miss. And then, in his press conference ahead of the Alabama game, Orgeron said absolutely nothing of substance and was completely checked out. It’s hilarious.

As LSU took the field against the Crimson Tide over the weekend, Orgeron achieved peak carefreeness.

Another subtly hilarious thing that Ed Orgeron is doing now is having LSU run out at the same time as the home team. He did this against Ole Miss and Saturday against Alabama told the ESPN broadcast coordinator that LSU wouldn't be going on the field until Alabama ran out😂 pic.twitter.com/7wndg8uzAz

He then got lost in the on-field pregame festivities while he was running out of the tunnel and was having a grand old time throughout the game.

A video montage of his antics on the sideline are truly glorious. It begins with Orgeron holding up “Ls” to the crowd and beating his chest, continues to show him emphatically signaling first down with a big smile on his face, and ends with him taunting the crowd after losing by six.

Take a look at the hilarity:

There are three games left in the Orgeron era in Baton Rouge: Arkansas, Louisiana Monroe and Texas A&M. The Tigers are currently 4-5, so they need to win two of three to reach bowl eligibility.

If you are a fan of college football, all things funny and having a good time, you should be rooting for a bowl game swan song for Orgeron. Can you imagine how little he would hold back?

Orgeron spoke about his on-field attitude against Alabama on Monday and he basically said, in so many words, “we had nothing to lose so we just sent it.”

"Things said about me personally, I don't take that lightly. I can't say nothing about it, but I can do something about it."#LSU Coach O explains is animated attitude at Alabama this past weekend.