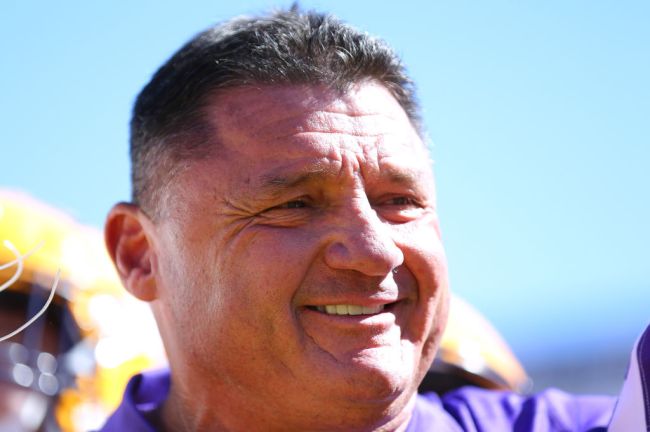 Ed Orgeron has already been fired as the head football coach at Louisiana State University. He will not be with the program beyond the conclusion of the 2021 and, as a result, he could not be less worried about what this season has in store.

Additionally, Oregeon was fired without cause. As such, he will get paid the entirety of his $16.8 million buyout and get paid $4.2 million per year not to coach the Tigers.

He made reference to how much money he is getting paid to be unemployed in the initial press conference and it is clear that he is not too shaken up. He got his ring, will forever be a legend in Louisiana, and is getting paid enough to get a cheeseburger or two.

Now, the old adage could not be more true: win or lose, what are they going to do, fire him?

Obviously, regardless of the fact that he has already been let go, Orgeron wants to win. However, his body language on the sideline during a recent loss could not be more telling.

He is totally checked out and it’s hilarious.

Orgeron spoke with the media earlier this week ahead of this weekend’s game against No. 3 Alabama and was clearly absent mentally. It made for an all-time soundbite.

While standing with a completely relaxed demeanor, Orgeron was asked what he thinks about his team and his coaches. He immediately began to sing the praises of the Crimson Tide before a reporter corrected him and redirected him toward the Tigers.

Back on track, Orgeron rattled off an answer about all of the things that LSU does that are “too predictable,” and practically listed every single aspect of both the offense and defense. The best part of the response came when he tried to explain what they were doing to fix it.

“At this part of the season, you just can’t put a lot of new stuff in, but we put in a couple of wrinkles to make it tough.”

Very specific, very heartfelt stuff from a coach who has already been let go. He clearly was neither stressed nor worried about anything in the world, knowing full well that Alabama is likely going to dominate his team on Saturday and that they literally have nothing to lose.

This…is the most incredible press conference clip of the year

There are so many levels to this I don’t know where to begin 😭 pic.twitter.com/txSGKJtxLc

It really can’t get any funnier.