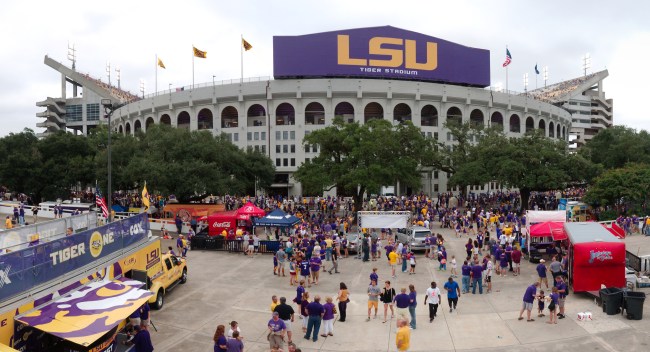 With in-person sports betting soon to be legal in Louisiana, Louisiana State is on the cutting edge. The university’s athletic department recently announced a MASSIVE partnership with Caesars Sportsbook, which is the first of its kind in the Southeastern Conference.

Both parties worked with LSU’s third-party, multi-media rights holder PlayFly Sports and agreed to a multi-year, seven-figure deal. It will make Caesars the exclusive gaming and sportsbook partner of the university’s athletics.

“We share a clear vision of how athletics and entertainment can come together to enhance the fan experience,” LSU athletic director Scott Woodward said. “We are excited to join with Caesars to make that vision a reality.”

In exchange for a very large sum of money (multiple millions, per sources), Caesars will receive a few things.

The gem of the deal, seemingly is naming rights for the new Caesars Sportsbook Skyline Club at Tiger Stadium. In addition, Caesars signage will be up throughout the stadium and the book will have exclusive present on the LSU Sports mobile app.

Beyond football, Caesars will receive signage opportunities at the basketball arena and baseball stadium, as well as broadcast and digital sponsorship rights. Caesars will also receive visibility for its sportsbook throughout all of LSU’s 21 varsity athletic programs.

Perhaps the coolest part, however, comes on Caesars’ end. The Sportsbook has committed to creating an annual scholarship fund to support LSU students from Louisiana.

This deal is monumental in the collegiate athletics world. Not only is it the first of its kind in the SEC, but it’s one of only a few nationwide.

Caesars Sportsbook recently partnered with the Fiesta Bowl in Arizona, marking the first bowl game sponsored by a book. Beyond Caesars, PointsBet shook the college sports partnership world in 2020 when it aligned with the University of Colorado.

Although other schools got the ball rolling, for an athletic department as large as LSU to partner with a Sportsbook will change everything. With sports betting becoming legal on a larger scale nationwide, this is the first of many deals to come across Power 5 conference programs.