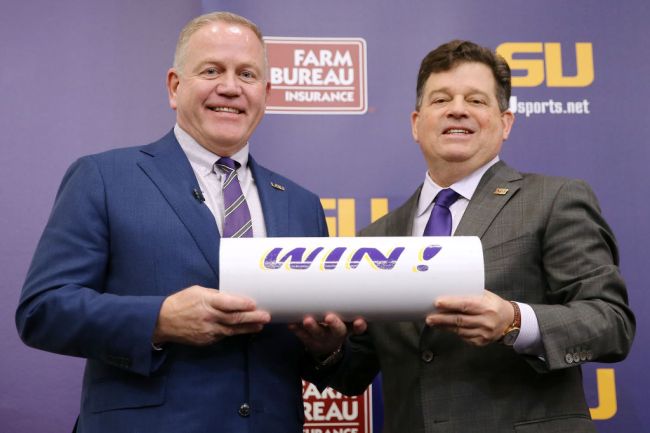 There is no subject in the world of college sports that is more hotly debated than NIL right now. Just last week it once again came to the forefront of conversation when Nick Saban called out Texas A&M over rumors about their recruiting class and NIL.

Now one of the newest rivals for Saban’s Alabama squad and Texas A&M, new LSU head coach Brian Kelly, had chimed in on the NIL conversation. Today he discussed the possibility of employment status as an alternative to NIL deals.

Kelly told Sports Illustrated’s Ross Dellenger that he doesn’t view this as a viable alternative to the current system.

It would be difficult to envision college athletes taking a some kind of pay structure and employee status at this point. Maybe before NIL took over that could have worked, but it’s unclear why players would want this.

The most talented players in college currently have the ability to land massive sponsorships deals and gain complete control of how they monetize their own image and likeness. The deals that they are landing are also probably more lucrative than whatever the NCAA would decide schools could give them.

As much as some coaches seem to be upset about NIL, it seems to have become the absolute best option for the best collegiate athletes. Brian Kelly seems to have that figured out and will surely try to use it to his advantage. Now the rest of the college football world will just need to figure it out for themselves.