The LSU Football Hype Video For The National Championship Is Oscar-Worthy, And Will Make You Wanna Run Through A Wall 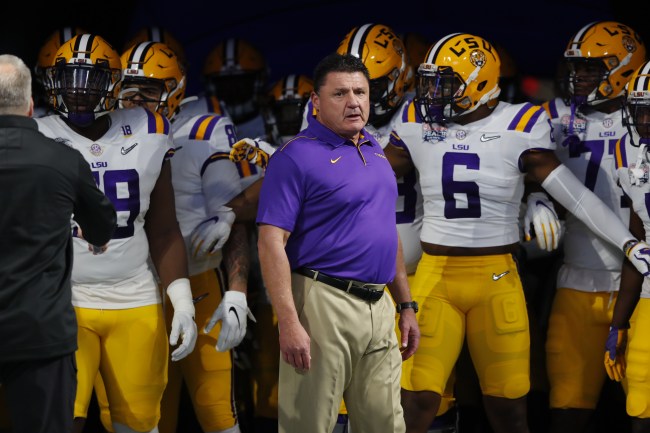 LSU football is about to play the Clemson Tigers in the College Football National Championship Game — which should be an absolute doozy of a contest. The headlines alone are terrific, with the current Heisman Trophy winner, Joe Burrow, going against an opposing quarterback, Trevor Lawrence, who hasn’t lost a football game since his junior year in high school. Add in the fact Clemson’s looking to repeat as national champs, and LSU’s the feel-good story of college football, and the showdown could be epic on Monday night.

While those two headlines alone are enough to captivate college football fans to tune in, LSU football only increased the electricity surrounding the game by releasing a killer hype video that will seriously make you want to run through a wall. Narrated by actor Anthony Mackie — a Louisiana native and LSU fan — the entire video is a crash course into the Tigers’ season, providing great moments that’s sure to give you chills. Take a look below.

A Swag You Have Never Seen
This Is Our Time. pic.twitter.com/NuPaWdVM16

See, told you the LSU football team’s planning on bringing it come Monday night. Sure, Clemson’s not about to bow down because a hype video is intimidating and brings all the passion, but, damn, the reigning national champs better get ready for a helluva dog fight and strap up their chinstraps nice and tight, because there’s going to be some hitting going on.

With the College Football National Championship Game being held in the New Orleans Superdome, LSU football knows that they’ll have homefield advantage — with New Orleans just about an hour drive away from LSU’s campus in Baton Rouge. And, while they’ve got the edge on paper because of that, as well as their No. 1 ranking and magical year to this point, don’t count out Dabo Swinney and Clemson trying to prove to the college football world that playing the underdog role is totally fine by them. Can it just be Monday already, because the hype is very real, guys.