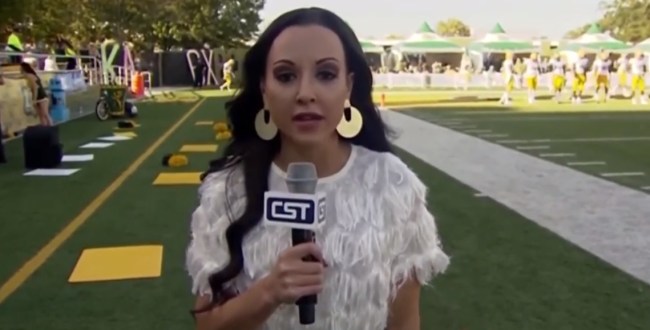 On the morning of today’s Oklahoma-LSU Peach Bowl game, a small, twin-prop plane headed for Atlanta crashed in Lafayette killing five people on board,

At least five people have died after an eight-passenger plane crashed in Lafayette on Saturday, Dec. 28, according to Lafayette officials. The passengers were heading to Atlanta to attend the College Football Playoff Semifinal at Chick-Fil-A Peach Bowl in Atlanta.

Six people were inside the Piper Fixed Wing Multi-Engine aircraft before it crashed in an open field at around 9 a.m. near the intersection of Feu Follet Road and Verot School Road.

One of the fatalities on the plane headed to the Peach Bowl was of sports reporter Carley McCord the daughter-in-law of LSU offensive coordinator Steve Ensminger.

BREAKING: ESPN sideline reporter & @wdsu sports reporter @CarleyMcCord was 1 of 5 people killed in a plane crash, today in Lafayette, LA. The pilot was taking passengers to the LSU game in Atlanta. McCord's father-in-law is offensive coordinator for LSU. https://t.co/TsHxlqiPsY

Several #LSU players including Myles Brennan and Blake Ferguson have found @SteveEnsminger on the field during pregame and embraced the coach after news broke that his daughter-in-law, Carley McCord, was tragically killed in a plane crash this morning. pic.twitter.com/2XGhuddEmu