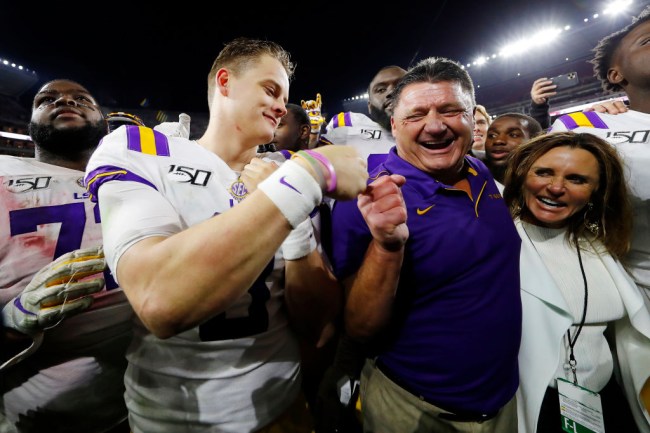 Sure, you win college football games by executing on the field, but you can’t win in college without elite recruiting. You know the old, somewhat annoying saying that you win games in the living rooms of recruits homes, but it really is true.

The LSU players clearly know the importance of recruiting.

Following LSU’s win over Alabama in Tuscaloosa on Saturday, which snapped the Crimson Tide’s 31-game home winning streak, a handful of Tigers ran over to a section of the stands filled with recruits and told them to come play in Baton Rouge.

This is a solid move from these players and shows just how strong of a program and culture Ed Orgeron and the Tigers are building at the moment. This year couldn’t be going better for LSU, but it’s still looking at the future, too.

Alabama and LSU fight for the signatures of plenty of recruits every single year. The win over the Tide may sway players to go to LSU instead of Alabama, but maybe this move from the players is that extra icing on the cake some players needed.

Orgeron noticed his players going over to the recruiting section as well.

“I think it’s phenomenal. We had a lot of recruits at the game tonight. I texted them, they called me. I think a lot of them were wearing their purple and gold socks tonight, he told 247 Sports.  I think there were a lot of guys that want to come be a part of our great football team. They want to get coached, they want to get developed. We have a couple spots left and we feel like we’ll get some great players in those spots.”

LSU travels to Ole Miss this Saturday before closing the year with home games against Arkansas and Texas A&M to close out the season.