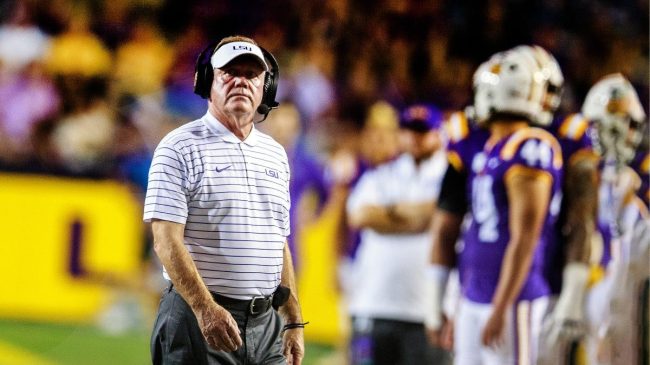 LSU fans, players and coaches suffered a scary moment in Saturday’s game against the Auburn Tigers as Jordan-Hare Stadium.

Reserve defensive back Sevyn Banks is in his first year at LSU after transferring from Ohio State. The Orlando native has played primarily on special teams through the first four weeks of the season. He found himself there on the opening kickoff again the Tigers and went to make a tackle on Auburn kick returner Keionte Scott.

Unfortunately, as he hit Scott he lowed his head. The hit sent Banks to the floor. LSU doctors and trainers quickly rush out to him. Banks was eventually loaded onto a stretcher and carted off the field. While he was conscious, he did not appear to show signs of movement in his extremities.

LSU CB Sevyn Banks was injured and taken off the field on a stretcher on the opening kickoff vs. Auburn. pic.twitter.com/d1kvy2ZWtC

Prayers up for LSU DB Sevyn Banks. The stretcher & cart is out for him. pic.twitter.com/fajSztEJWv

The ESPN broadcast said #LSU CB Sevyn Banks was alert and speaking with the medical staff.

After being taken out on a stretcher, the broadcast said Banks would be taken to East Alabama Medical Center in Opelika for further evaluations.

LSU’s official football account offered no update. But the Tigers did send well wishes out to Banks.

As did loads of college football fans.

Auburn family praying for @SevynBanks, his family, and teammates. So incredibly sorry this happened!! 😭

Gator nation praying for you

Prayers came from far and wide across the college football universe.

Fighting Irish sending thoughts and prayers for him!!!!!

Including prayers from Auburn fans.

Yet another scary scene in the football world this year. Here’s hoping that Banks, like Tua Tagovailoa, heals quickly.