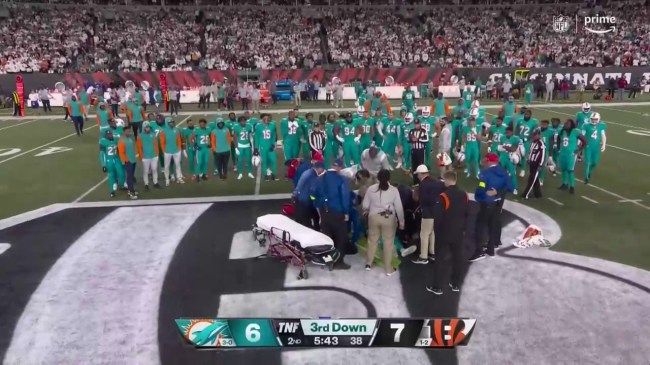 Update: The Miami Dolphins have confirmed in a tweet that quarterback Tua Tagovailoa has movement in all extremities and is being taken to the University of Cincinnati medical center.

Update: Prior to the end of the first half, the Prime Video broadcast reported that Tua Tagovailoa had suffered a “head and neck” injury and that he was conscious as he was being transported to the University of Cincinnati medical center.

Miami Dolphins quarterback Tua Tagovailoa was knocked out of the Thursday Night Football game between the Dolphins and Cincinnati Bengals with an apparent concussion during the second quarter. The third-year QB had to be stabilized and carted off the field and was replaced by backup QB Teddy Bridgewater.

The Thursday Night Football injury to Tagovailoa came just days after the NFL world questioned how he was allowed to re-enter Sunday’s game against the Buffalo Bills after suffering what everyone thought looked to be a concussion.

In the days since Sunday’s game against the Bills, though, both Tua and the Dolphins maintained that it was his back that was injured and not his head.

Following the injury, football fans, former players, and analysts took to Twitter to send their wishes to the young signal caller.

“Prayers up for Tua! That is heartbreaking to see,” said former NFL cornerback and current Prime Video analyst Richard Sherman.

Prayers up for TUA! That is heartbreaking to see.

Man.. that was tough to watch.

Prior to the injury, Tagovailoa was in the midst of a breakout year as he completed 71 percent of his passes for 925 yards, eight touchdowns, and two interceptions so far this season, his first under new head coach Mike McDaniel, who the Dolphins hired away from the San Francisco 49ers despite never having any previous head coaching experience.

Following Sunday’s game against the Bills and Tua’s return to the field despite the apparent head injury, the NFLPA opened up an investigation into whether or not the Dolphins followed the league’s concussion protocol.

In an interview with the Washington Post on Wednesday, NFL senior vice president Jeff Miller said “every indication from our perspective is that [the concussion protocol] was [followed.”