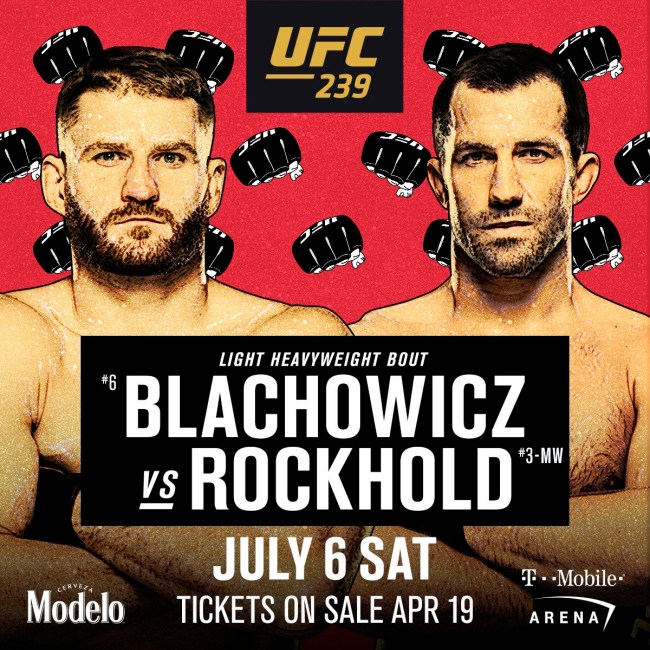 Love him or hate him, it certainly says something about Luke Rockhold that he’s entering his light heavyweight debut at UFC 239 as the betting favorite. It says even more about Rockhold considering he hasn’t fought in nearly 17 months.

A former UFC middleweight world champion, Rockhold is vicious kicker, a southpaw who lands brutal shins to the body, while also dominating the ground game with his sophisticated and slick grappling attacks. He’s a high-percentage finisher who’s beaten a trio of former world champions, but of late, there have been serious questions about his ability to take a punch, which make the pre-fight odds for his upcoming UFC 239 bout against Jan Blachowicz even more startling.

See, the Luke Rockhold of 2015 looked infallible, impenetrable. He had the size, and speed, and skill to dismantle every opponent at middleweight. Rockhold rattled off five-straight finishes to capture the UFC middleweight title, despite dehydrating himself so badly to make weight that he was often unable to speak following weigh ins.

Then his career hit a bit of a rough patch.

First, losing his title to Michael Bisping in a shocker of an affair at UFC 199, Rockhold began to slowly withdraw from mixed martial arts to focus on his career as a Ralph Lauren model. Still fighting once a year, he maintained some relevance, even fighting for an interim title in early 2018. The weight cuts were clearly taking too much of a toll on Rockhold’s broad and muscular frame, prompting a prolonged absence from fighting. The hiatus was then coupled with a decision to reinvent himself as a light heavyweight.

Big enough, tall enough, and long enough to compete with the entire roster at 205 pounds, Rockhold possesses the size and power to make a legitimate run at the light heavyweight title. But can he take a punch against guys who are significantly larger than his previous opponents?

Rockhold and the oddsmakers would have us all believe that his previous knockout losses were actually exacerbated by the extreme weight cutting and dehydration, and with 20 more pounds on his frame, he’ll be able to withstand the punishment.

Blachowicz is actually the ideal opponent for Rockhold’s light heavyweight debut. A perennial top-15 fighter at 205 pounds, Blachowicz is no easy customer, but he has been beaten five times inside the Octagon. Stylistically, it’s a good matchup as well, considering both Rockhold and Blachowicz tend to engage on the feet, but have plenty of expertise on the ground.

Rockhold’s skill level tends to be a bit higher everywhere the fight can take place, but what fans really want to know is, how will Luke Rockhold perform at light heavyweight? Will he have more stamina? Will his power translate up a division?

It’s those questions that make it worth ordering the UFC 239 Pay Per View main card on ESPN+. Well, perhaps the four other bouts on the card are also worth watching (they are), but Rockhold’s return and reinvention are something special, something worth tuning in for, and something that could very well be the commencement of the second act of his career.

There’s also the possibility that this fight against Jan Blachowicz at UFC 239 is the prelude to a new feud, one with UFC legend, and longtime light heavyweight champion, Jon “Bones” Jones, who has long been at odds with Rockhold’s close friend, Daniel Cormier.

That storyline could very well be one that continues throughout the remainder of 2019, potentially setting up a title fight between against Jones later in the year, but first Rockhold will need to collect his first career victory at light heavyweight at UFC 239, and he’ll need to do it impressive fashion.